Birds can two months to spend in the air 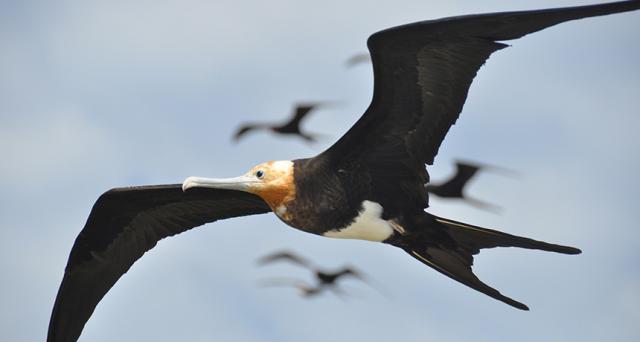 A group of French biologists found that birds large frigates can hold in the air for almost two months and overcome hundreds of kilometers. According to the researchers, for travel in short distance, they caught the gusts and updrafts of air, hovering at a height of 50-600 meters under Cumulus clouds, and every 6 minutes flapping the wings.

If you are travelling long distances they use a strong ascending air flows out into Cumulus clouds. During such flights they can rise to a height of 4 thousand meters, the scientists said.

For the study of large frigates that live in the Indian and Pacific oceans, experts found on the neck of the bird, a small device consisting of a GPS transmitter, solar battery, sensor, registered heartbeat, accelerometer and altimeter, according to Redorbit. The whole kit weighed only 10 g.

Scientists had previously suspected that the frigates do not have water repellent feathers that can overcome a considerable distance, but do not assume that these birds can fly for months.

Over the Indian ocean are often formed large areas of calm. Frigates usually fly around these zones for many days in ascending streams of air. Being near the zones of calm, the birds spend about 10% of the time in search of food. The rest of the time frigates are spending on flights between clouds, breaking up to 600 km per day. Researchers believe that during these trips, the birds can sleep while in the air.

To date, scientists were convinced that the frigates avoid entering the clouds because of the turbulence. French experts conducted a study has shown that this statement is not true. It turned out that the frigates fly into the clouds to fly long distances. Scientists have observed how some of the birds rose above the water to heights of up to 3.2 km away, where there is little oxygen and the water freezes. But such ascents were rare. Frigates usually prefer to fly at an altitude of 45 – 600 meters above the ocean.