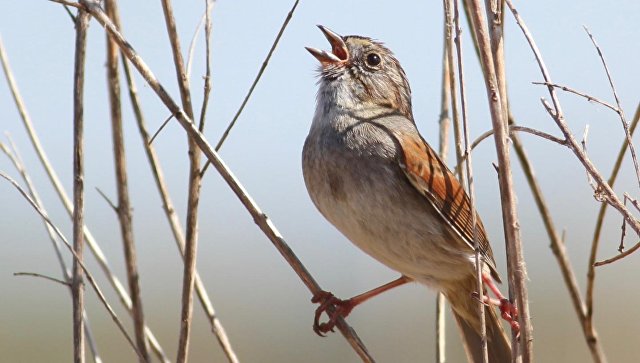 Birds-oatmeal, living in the marshes of America, have been owners of millennial singing traditions – their males pass their best “hits” from generation to generation for several hundred years, say scientists.

“Our research shows that animal culture can not be inferior to human civilization in some ways, but we managed to find out that modest oatmeal can develop singing traditions and follow them for many generations.” Such “conformist behavior” was formerly considered an exceptional feature of people, ” Robert Lachlan (Robert Lachlan) from the University of Queen Mary in London (UK).

Most birds are good at distinguishing between harmonious and inharmonious melodies. In this case, some birds, in particular, singing birds, use complex melodies for communication. In the scientific community, there are discussions about whether the “musical” hearing of birds and their ability to perform songs with inborn skills, or whether they acquire them in the course of communication with adults.

Observations of recent years show that songbirds do not just automatically learn songs, but they are able to change them and “adjust” them to specific life situations. For example, males amadine dramatically change their repertoire when they meet unfamiliar females, portraying themselves as healthier than they actually are.

Lacklan and his colleagues have found further evidence in support of the “cultural” hypothesis of the evolution of the singing abilities of birds, studying the behavior of young oatmeal living in swamps in the northeastern regions of the United States.

Songs of these distant “cousins” of sparrows, as scientists explain, consist of short sets of notes, which include from two to five sounds, which these birds share in an arbitrary manner and constantly repeat, forming long trills. As a rule, each colony of oatmeal has its own combinations of similar sounds, by which they can be distinguished from birds from other regions of the country.

Studying the differences between songs of males from different parts of America, scientists noticed an unusual thing – birds from the same flock of oatmeal performed about the same set of songs, or memorized those melodies that were very similar to them.

This discovery led scientists to follow how the chicks of these birds are learning to sing. To their great surprise, these observations showed that the young oatmeal were great conformists – they remembered only those songs that were the most popular, both among males and females.

Moreover, a deep analysis of the structure of their trills showed that almost all the melodies that these birds performed were variations of one ancient combination of sounds, whose age is, according to Laklan and his colleagues, more than a thousand years.

“It is possible that these songs are the same age as the Vikings who infiltrated America at the end of the 9th century AD They most likely heard the same trills of oatmeal that we can enjoy today thanks to the amazing stability of the culture of these birds that can compete with the human plan of vitality, “the scientist concludes.