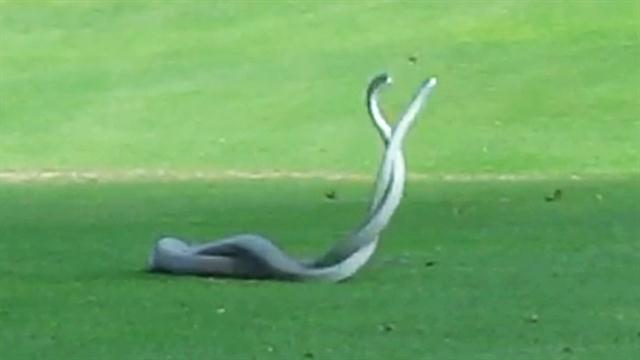 Two black mambas staged a fight during a game of golf in the Republic of South Africa (South Africa). The fierce battle of snakes was captured on the video of Kara Treyern.

At first, the woman decided that a couple of spitting cobras were fighting, but later realized that mambas were grabbing on the golf course. Trierne reported its discovery to golfers, who immediately stopped the game. The golfers, along with the author of the video, traveled around the snakes and saw that the struggle had tired the dangerous mambas. Reptiles split and retired into the bushes.

Black mamba is one of the largest, fastest and poisonous snakes in the world. The bite of this snake is fatal, unless you take an antidote. The area of ​​the bite swells, there is a burning pain in it, peripheral paralysis develops.