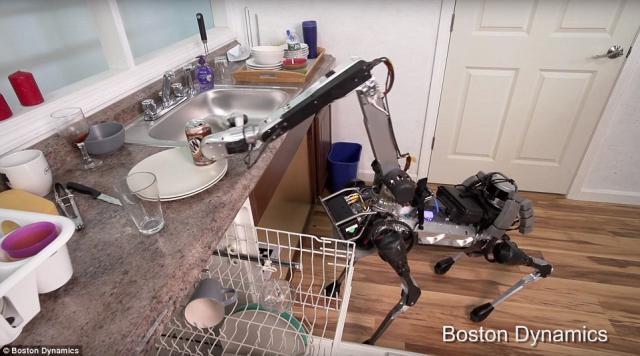 The company Boston Dynamics, famous for its Bigdog and Atlas robots, has introduced its new development – a robot SpotMini. As the name implies, this device is a smaller version of robot Spot. The new model unlike the previous one, for the military, aimed at the consumer market. The company believes that the robot dog will be popular in the house as domestic helper.

SpotMini weighs 25 kg, together with the robotic arm 30 kg. the Robot is fully electric. There are no hydraulic actuators. Without recharging it can work for 90 minutes. According to representatives of Boston Dynamics, is one of the quietest robots, created by engineers of the company. SpotMini equipped with various sensors, including a depth camera, a solid-state gyro sensors and proprioception.

The robot can load a dishwasher, clean up the trash from the table. SpotMini able to walk half-bent position, which allows him to crawl, for example, under a low table. The robot on their own after the fall: in the demo SpotMini effortlessly gets up after slipping on a banana peel.