Bumblebees turned out to be lovers of cities 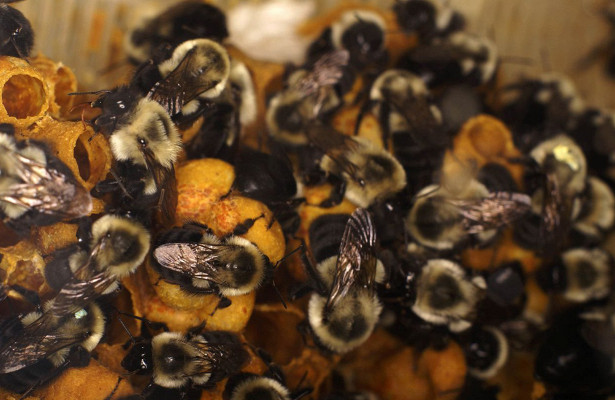 Environmentalists found that the bumblebee colonies in the city live much better than in the countryside. In particular, they have a higher peak population, more food reserves, fewer parasites, and also produce more dioecious individuals and generally last longer. The study is published in the journal Proceedings of the Royal Society B.

Today, urbanization – the growth of cities and the surrounding environment – is one of the main factors that affect the habitats of animals and plants. Of course, urbanization affects the distribution and diversity of species, but how it affects the reproductive success of an animal, scientists rarely explore.

Bumblebees adapted well to life in an urban environment. Due to their calm behavior they are considered one of the most friendly representatives of the family of real bees (Apidae).

In the new work, scientists caught the kings of the earth bumblebee (Bombus terrestris) and placed them in varying degrees of urbanized areas – from city centers to rural areas. In total, scientists identified 38 such points between the small town of Basingstoke and London. For the new colonies observed for ten weeks, which corresponds to the typical lifetime of the nest of bumblebees. Each week, the authors measured the number of individuals, including those that can multiply, the number of parasites in the nest, and the amount of nectar and pollen stored.

It turned out that in nests located in cities, more non-sterile females and males are born than in rural ones. The total number of “population” also turned out to be greater in urban colonies. Moreover, rural ones suffered more from parasites – bumblebee bumblebees, which penetrate into the nests, kill the queen and breed their own offspring at the expense of ordinary bumblebees.

The authors find it difficult to explain their observations. They believe that their results are related to a complex of factors, in particular, the use of toxic substances in rural areas, such as pesticides. Another factor is that in cities near the houses people plant a large variety of plants with different flowering times, while in the countryside plants with a short flowering period prevail.