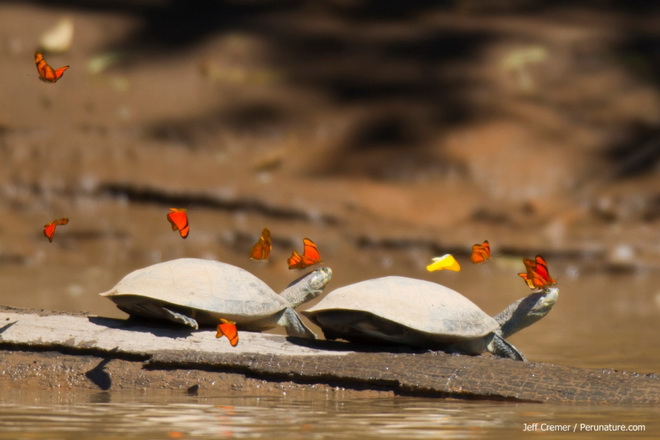 In the western part of the Amazon rainforest, you can see how many butterflies curl around the heads of yellow-spotted shield-footed turtles (Podocnemis unifilis), or trax. This is a fairly common picture in those places, but the reasons are surprising: butterflies really drink turtle tears.

This conclusion was made by the scientist Phil Torres from the Tambopat National Reserve in Peru. Butterflies seem to be attracted to the salt found in the drops, or rather sodium. In this region, animals lack mineral macronutrients: the fact is that it is located 1,600 kilometers from the Pacific Ocean, the main source of mineral salts, and is well protected by the Andes from the winds. Dust and minerals are often brought only from the east, making a long journey from northern Africa, depleted in winds and rains.


Yellow-spotted shield-footed turtles, like most freshwater turtles, are predators, so they get the necessary substances from meat in excess. Attracted by sodium and other mineral elements in turtle tears, butterflies flock. They immerse proboscis in drops and thus passively feed. So far, scientists can not answer the question of whether such behavior of insects causes any inconvenience to turtles, but it seems not.