Called the origin of consciousness in the human brain 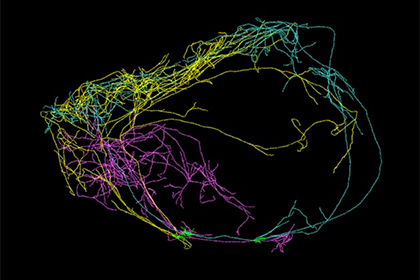 A group of neuroscientists under the direction of Christof Koch found evidence that the claustrum can generate consciousness. Scientists have discovered in this structure, a giant neuron, which surrounds their processes, the entire outer layer of the brain and mediates the interaction between its various regions.

Claustrum (fence) is a thin plate of gray matter under the cerebral cortex deep white matter. By hypothesis, Francis Crick and Christoph Koch, it can play an important role in the work of consciousness.
In order to determine the structure of the fence, the researchers used genetically modified mice as a model for neurobiological studies. Special drug activates encoding green fluorescent protein genes in the nerve cells of the claustrum rodents. In the result, the protein is distributed throughout the neuron, allowing to determine the spatial location of the most recent. With the help of a computer program managed to create a 3D-reconstruction of the three neurons of the fence.

Scientists have discovered that one of the neurons was very long. The cell body wraps around the outer layer of the brain in contact with its various regions. According to Koch, this suggests that the claustrum provides the connection between the parts of the Central nervous system generates consciousness.

Rafael YUST, a neuroscientist at Columbia University in the United States, believes that the existence of long neurons does not prove the participation of the fence to ensure the consciousness. However, used in the study method will allow you to identify different types of nerve cells in the brain and will help determine their function.