Can I use hurricanes to generate energy? 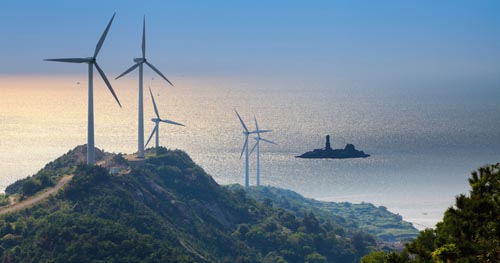 Tropical cyclones bring trouble. Expecting the worst, meteorologists watch their growth and movement with all their might, and residents of coastal cities prepare for evacuation. “Huge destruction, buildings, buildings and houses are seriously damaged, trees are torn up with roots, vegetation is destroyed,” – describes their Beaufort scale. Large turbines catching “clean” wind energy, stop rotation, so as not to collapse under his pressure. In 2005, on one windmill tower in the UK, the mechanism of such a blockage broke down. Unprepared meeting with the storm ended in the fact that the details of the windmill untwisted to a frantic speed were heated and flared.

On the same Beaufort scale, a full hurricane starts at a wind speed of 30 m / s. The tropical cyclone feeds on the evaporation of warm water and over the land quickly loses its force. But while the inflow of energy is preserved, it is transformed by a hurricane, as a thermal engine, into mechanical energy of the wind, into the condensation of water vapor. The strength of this onslaught arouses awe: the most ordinary tropical cyclone (radius 60 km and speed 40 m / s), according to the US National Oceanic and Atmospheric Administration (NOAA), carries about 1.5 terawatts of kinetic energy. The condensation of water in clouds and raindrops takes away about 600 TW – this figure is an order of magnitude greater than all the current needs of mankind.

It is not yet possible to use the energy of condensation on such a scale, but the wind power has been turned into electricity for a long time and all the more: only in 2016 wind turbines of 54 GW were installed in the world. But even on this impressive background, the energy of the average hurricane looks almost inexhaustible, and thoughts about how to direct it to a peaceful channel arise with enviable regularity. The last in this list was noted by the famous astrophysicist Neil Degrass Tyson. Commenting on the destruction caused by a series of cyclones that swept the eastern coast of the Atlantic in the fall of 2017, he exclaimed: “Where are the engineers, where the scientists who will not hurry to leave the city as the hurricane approaches, but start working to tame its energy?”

Demolition of the roof

However, there are such scientists. As early as 2015, Arindam Chowdhary and André Tremann of the International University of Florida patented the AMPS (Aerodynamic Mitigation and Power System) system, which must simultaneously capture the energy of a hurricane wind and protect buildings from destruction. It is assumed that spiral turbines, horizontally laid along the edges of the roofs or in the pipes for water drainage, will be able to use the movement of especially powerful currents that rise when the wind collides with a fixed obstacle. Such streams easily damage the roof in a strong wind, but they can be weakened, at the same time turning some of the energy into electricity.

Developers continue to experience AMPS, although they do not expect that it will withstand a head-on collision with the hurricane. But with strong storms, which now and then lead to damage to the infrastructure and local power outages, the system will provide additional protection and will allow you to power “a small refrigerator, smartphone, laptop and several lamps.” To generate AMPS electricity, even a weak wind with a speed of 2-3 m / s is enough, and the authors confidently plan the mass production of such units.

A complete tool for catching hurricane energy, this system, of course, can not be called. Where are the free “clean” gigawatts and terawatts? Where is the ability to withstand the most violent storm? For all this, AMPS is simply not calculated. But the Japanese engineer and founder of the startup Challenergy Atsushi Shimitsu is guided precisely by such working conditions of his bezlopastnyh wind generators. The “vertical wind turbines of the new generation” Magnus developed by him use the force that arises when they flow around the air stream. This is how the Magnus effect works: a rotating body creates a vortex motion around itself, and on the one hand it goes to the same direction as the flowing stream, and on the other hand it goes back. This leads to a difference in wind speed and pressure on the different sides of the turbine, which forms a force directed perpendicular to the wind flow.

The Magnus windmill uses three such vertical turbines, mounted on a triangular prism frame. The force arising in the turbine rotates it with a completely safe speed, and at peak wind speeds, the movement is also retarded mechanically. The first meter prototype, presented by Shimizu, collected a lot of awards and allowed to attract financing for the next steps. And in 2016 on the coast of Okinawa have already installed a full-size three-meter prototype for field testing. The generator works and gives out electricity, although the developers do not yet give concrete estimates of its performance and even the ability to withstand a real hurricane.

But Ocean Power Technologies reveals specific figures and even successfully installs PB3 generators around the world. PowerBuoy technology uses the energy of sea waves: they either raise or lower the upper movable part of the structure with respect to the heavy armature, and this movement is converted into electricity. 10-ton floating buoys practically do not require supervision, automatically maintaining the charge of on-board batteries with capacity from 44 to 150 kW / h depending on the equipment, and if the energy is produced in excess, quickly dissipate it in the form of heat. PB3 generators operate off the coast of Japan, Scotland and Hawaii, are installed in Spain and Australia at depths of 20 to 1000 m.

But the main pride of OPT remains a casual encounter with Hurricane Irene, which in 2011 walked along the coast of New Jersey, where the PB3 demonstration was being conducted by the US military. Gusts of wind reached 190 km / h (more than 50 m / s) and caused damage of $ 10 billion, but floating generators remained intact. Representatives of ORT recall this event every now and then – certainly significant, but the problem is still not decisive, because even with thousands of such generators, the power of the cyclones will remain virtually undeveloped. All proposed by the engineers so far can be compared with the attempts of ants to use the energy of a draft. We did not even start to really tame the hurricanes.