Can powerful hurricanes cause earthquakes? 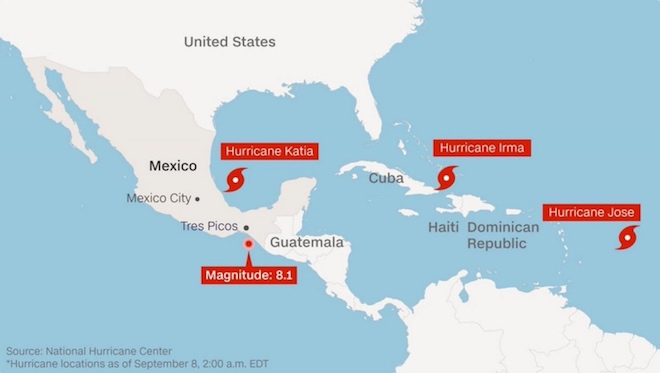 When destructive hurricanes and equally strong earthquakes occur about the same time, as it was in 2017, many scientists are wondering whether they are related.

Vdovinsky developed the idea for a research project after the 2010 earthquake in Haiti. The seismic event of magnitude 7 destroyed much of Port-au-Prince and killed more than 300,000 people. Two years earlier, four powerful hurricanes – “Fey”, “Gustav”, “Hannah” and “Ike” – showered heavy rains in Haiti, killing 800 people and killing the crops in a few weeks.

In some mountain environments, subject to both tropical cyclones and earthquakes, heavy rain – from 90 to 270 cm over a period of 3 to 5 days – can cause a large number of landslides. Over time, the landslide material is transported to the ocean, which leads to considerable erosion of the mountains and affects the stress field within the earth’s crust. According to the scientist, this can cause an earthquake. If he is right, an earthquake can occur a few months or a few years after the cyclone strikes.

Haiti is experiencing limited seismic activity, so Vdovinsky is testing its hypothesis in Taiwan, where there is a wealth of data on earthquakes and cyclones.

“We plan to provide compelling observations that will demonstrate the alleged cascading relationship between wet tropical cyclones, landslides and earthquakes,” the author said.

According to him, the results will be applicable to the Caribbean Sea, South America and other similar tectonic environments affected by wet tropical cyclones, including the Philippines, where in July 2017 there was an earthquake with a magnitude of 6.5 – in an area devastated in 2013 by a typhoon ” Hayyan ».

Although the months and years separating cyclones and earthquakes make it difficult to translate the results into a forecasting tool, Vdovinsky hopes that the data can be used to develop a general warning about possible future earthquakes.