Can you become a cyborg in 10 years?

The idea of ​​directly combining the living and electronic brain is not the first decade that has stirred the minds of scientists around the world. Modern neyroimplants make it possible to realize it, but are they as perfect as it seems at first glance?

Just as the ancient Greeks dreamed that someday a person would fly like a bird, modern scientists and dreamers dream of the advent of the era when the combination of the human mind and the machine will allow us to defeat our most important enemy – death. But can the living mind directly connect to artificial intelligence with the help of the technological interface “brain-computer interface” (BCI) to overcome the limitations of biological nature?

Over the past 50 years, researchers from university laboratories and companies around the world have made impressive progress in the synthesis of human and computer consciousness. Recently, entrepreneurs like Elon Mask or Brian Johnson are increasingly announcing new start-ups that are striving to empower people through “smart” computer systems.

But what are the technologies of combining the living and electronic brain in our day? And what are the consequences of connecting the consciousness to the digital interface?

Eb Fetz, researcher at the Center for Sensory Neural Engineering (CSNE), is one of the first “pioneers” of connecting a computer to the brain. In 1969, before the era of personal computers, he experimentally proved that it is possible to strengthen the brain signals of monkeys to control the needle that moved along the dial.

Much of the work on modern BCI is aimed at improving the quality of life of people suffering from serious motor system disorders or even paralyzed ones. We have already witnessed similar technologies: for example, researchers from the University of Pittsburgh used brain signals to control a robotic arm. And scientists from Stanford were able to connect the brain to the tablet, which allowed paralyzed patients to use gadgets using a wireless network.

Similarly, some virtual signals can be sent to the brain to simulate sensation. Such manipulations are usually carried out with the help of weak current pulses. But what about the basic feelings of a person – sight and hearing? Already, there are prototypes of bionic eyes for people with severe visual impairment. These are already commercial products, and not just laboratory samples, although in the modern market, their choice is not so great. But implants for the restoration of the auditory function in contrast to the most successful and the most widespread in the world bionics – now they are used by about 300 000 people.

The bi-directional brain-computer interface (BBCI) can not only read signals from the brain, but also send information back to the brain through stimulation. The most complex varieties of such systems are, of course, those that interact with the nervous system. Now scientists are studying BBCI as a radically new rehabilitation tool for the treatment of strokes and spinal cord injuries. Studies have shown that BBCI can be used to strengthen links between two brain regions or between the brain and the spinal cord and redirect information around the area of ​​damage in order to resuscitate a paralyzed limb.

It would seem that we can conclude that in 10-15 years, the neurointerfaces directly connected with the brain will be an integral part of every person’s life. Or is it not?

Time has not come yet

Not all BCIs are invasive. There are also those that do not require surgical intervention. As a rule, the principle of their work is based on the removal of indicators of brain activity through the cranium (the very amusing caps with electrodes and wires). With their help you can, for example, move the cursor on the screen, manage a wheelchair, robotic manipulator, drone and even humanoid robots. 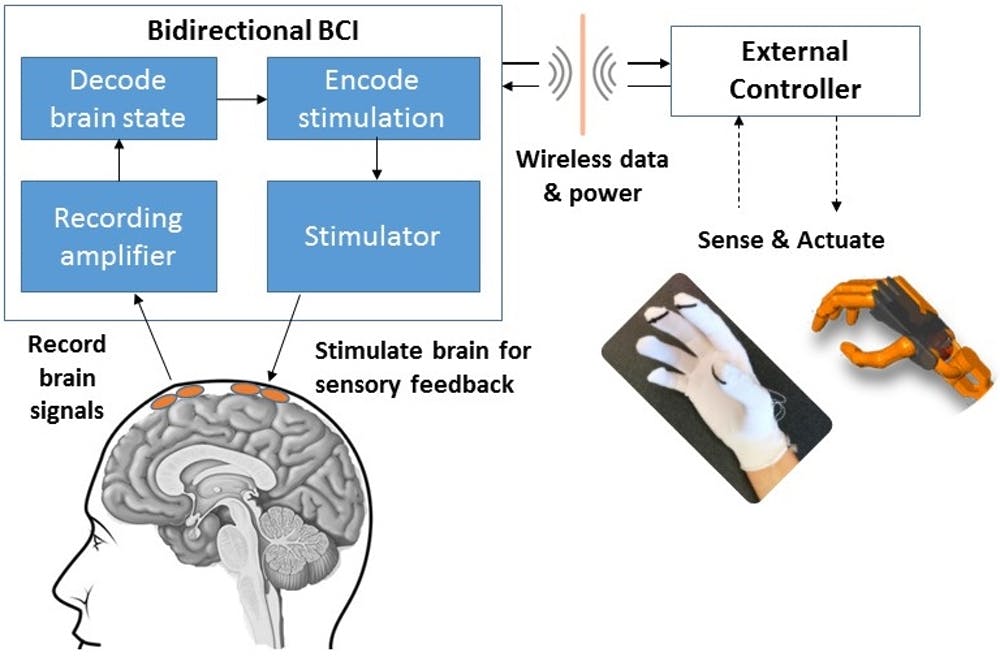 The bi-directional brain-computer interface (BBCI) can read signals from the brain and send information back to the brain through stimulation.

It sounds cool, but let’s take a closer look at the existing prototypes. From the first glance it is clear that all these miracles of engineering thought work much more slowly and less accurately than the “natural” parts of the human body. The bionic eye has a very low resolution; The auditory implant still manages to cope with speech, but does not allow listening to music or simply complex sound compositions. In order for the technology to work reliably, it will have to be involuntarily implanted surgically – this is a prospect for which not everyone can decide.

It is also worth noting that all demonstrations of modern bionics are conducted in the laboratory after a long and methodical calibration of the equipment for each specific situation. At present, experiments prove that such technologies can be implemented in practice – but they are still very, very far from being practical and convenient for their daily use.

Despite all the problems listed above, in the future the situation can radically change. For example, no one requires BCI to be perfect: our brains have unique adaptive abilities. Just as we learn to drive a car or use a smartphone, we can accustom the body to new types of sensory information, even if it is not transmitted invasively, but, for example, with the help of magnetic impulses.

Ultimately, judging by everything, it is the bi-directional BCI of the future that will become the way that will ensure the full interaction of the living and mechanical brain. For example, an injectable “neural lace” may prove to be a promising way to gradually allow neurons to grow with implanted electrodes, rather than abandon them. Flexible nanowire probes, neural bridges and vitreous carbon interfaces can also allow biological and technological computers to successfully coexist in our bodies.