Canadian biologists have solved the “riddle” of chicken and eggs 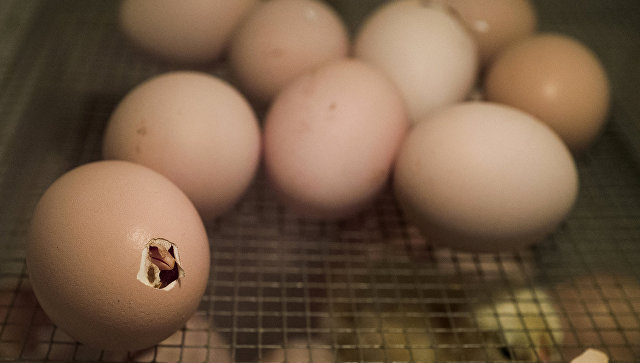 Canadian biologists have discovered one of the main mysteries of chicken eggs – they managed to figure out how the chicken manages to get out of the egg, capable of withstanding the triple body weight of the hen.

“We found that the eggshell consists of three layers of nanostructures that have different strengths, elasticities, and other mechanical properties.” Interestingly, these structures change as the embryo grows, and by the time the chick hatches from the egg, they are weakening, which helps break the shell, “said Marc McKee, a biologist at McGill University in Canada.

Since antiquity, philosophers, naturalists, laymen and scientists have often thought about how chickens and chicks of other birds are born. On the one hand, even the weakest young birds can independently break the shell and get out of the egg, and on the other – the eggs have an unusually high mechanical strength, withstanding the pressure of the body of a club or larger birds.

Mackey and his colleagues could find the answer to this question using a particle accelerator in order to cut the eggshell eggshell into thin layers and study them using an electron microscope. This helped them for the first time to look at how the shell is constructed “from within” and to understand how the chicks manage to break it.

As it turned out, it is an extremely high-tech material combining nano- and biotechnology. It turned out that the shell consists of three layers of nanocrystals of calcium carbonate, each of which plays its own role in protecting the future chick from the external environment.

The position of these crystals, in turn, is controlled by the osteopontin protein, which scientists previously considered a kind of “evolutionary mistake” and atavism, a legacy of dinosaur times, when the eggs were still covered with a leathery shell. Mackey and his colleagues found that its molecules were distributed on the shell not by chance, but served as a kind of framework to which chalk nanoparticles were attached.

Owing to this, as well as the fact that osteopontin gradually disappears from the inside of the shell by the time the chicken leaves the light, the chick can easily break the shell from the inside, but the egg will remain strong enough outside so that the hen can sit on it.

“About 10-20% of the eggs that get into shops or in the customers’ refrigerators are broken or damaged, which increases the likelihood of contamination with salmonella.” Understanding how the “nanobrain” of eggs works will help us change the work of the laying hen genes in such a way that their eggs will become more durable and protected from microbes, “concludes Mackey.