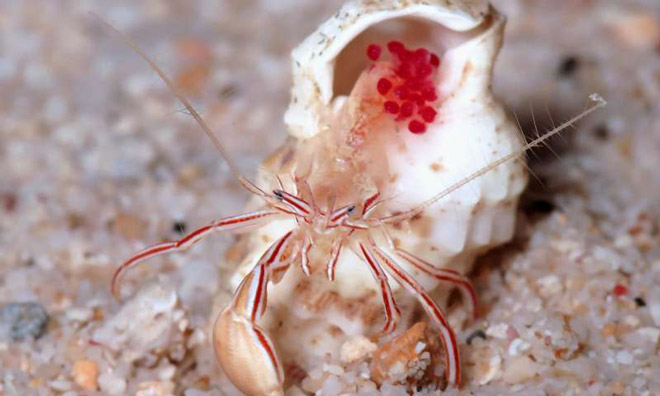 Have you ever seen a candy with eyes that runs away from you? Meet! Caramel hermit crab, whose legs just like Christmas candy canes with bright red stripes.

Photographer and naturalist Ellen Mueller shot a reef lobster during a night dive off the coast of the island of Bonaire, part of the Caribbean archipelago. On one of the images she noticed a strange little “candy”, accidentally caught in the frame.

“I’ve done many night dives and know who you may meet, but these cancers never seen before,” said Mueller. She sent the photo to the expert on crustaceans to Rafael Lemaitre national Museum of natural history (USA). The scientist confirmed that it was indeed previously unknown to science, and asked to take more pictures close up.

Mueller was sure I would be able to find at least one more, since these arthropods have a length of two millimeters and hide in crevices. But she managed to notice a few. “They are very tiny and hide under the ledges. I thought I would never see them, but I got lucky.”

Cancers were at a depth of about 14 meters in crevices occupied by other marine animals including Moray eels, which loomed up in the darkness.

Later, having studied the pictures, she noticed that one cancer is creeping right through the body of the Moray. According to Lemaitre, they eat with eels slime and other biological debris. Their decals are typical for tropical fish-cleaners who use their bright colors and patterns to advertise their services.

“The idea of this symbiosis is intriguing, although the evidence is not yet quite convincing. But if this is true, it will be the first such example among the hermits,” said Jan Pechenik, a marine biologist from tufts University in Medford. 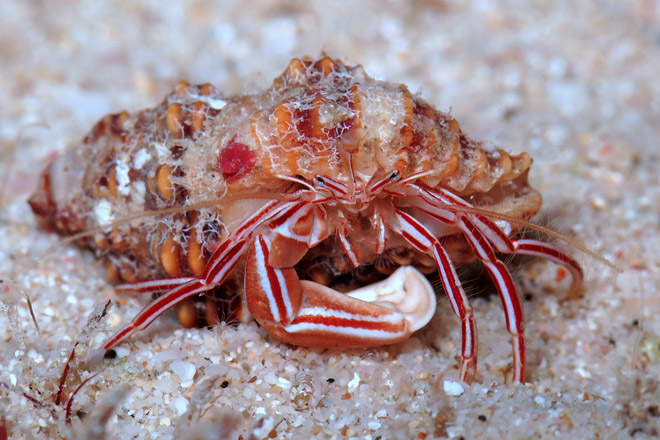 Another peculiar feature of caramel cancer is large compared to the body size, claw in the form of a scoop. “Its claw is unique. I wonder what she told him? Maybe he uses it as a spoon for eating?”, suggested a scientist.

The new species was named Pylopaguropsis mollymullerae in honor of granddaughter, Ellen Mueller named Molly. “I hope when she will grow, it will continue the tradition of protecting the amazing and fragile the underwater world of the Islands,” said the photographer.