Cards of anthropogenous emissions of carbon dioxide are received 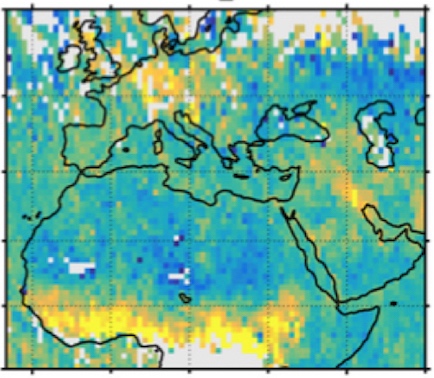 Scientists for the first time created global maps of anthropogenic emissions of CO2, using exclusively satellite observations of greenhouse gases in the atmosphere. Cards are based on the data obtained from the satellite of NASA of Orbiting Carbon Observatory-2 (OCO-2) and generated by means of a new technique of data processing.

Any companion didn’t allow to measure before carbon dioxide with such quantity of fine details that researchers could create the cards of anthropogenic emissions based only on satellite data. Earlier cards also include analysis results of economic data and modeling.

Team of scientists from the Finnish meteorological institute in Helsinki, using the data OCO-2, constituted three main cards, each of which is concentrated on one of regions of Earth with the biggest emissions of carbon dioxide: east part to the USA, Central Europe and East Asia. Cards show wide circulation of CO2 in large urban areas and the small centers of high emissions.

“OCO-2 can even find the small, isolated areas with emissions, including the certain cities — the author of a research Jane Hakkaraynen noted. — It is very powerful tool which gives new understanding of a situation”.
Anthropogenic emissions of carbon dioxide grew at considerable rates since the beginning of industrial revolution, and greenhouse gas accumulated in the atmosphere within a century or more. It means that modern emissions constitute only a small part of total amount of CO2 in our atmosphere.

“Now the background level of carbon dioxide in the atmosphere constitutes about 400 parts on one million from which emissions from human activities within the last year can reach only three parts on one million” — the scientist explains. In case of data processing, Hakkaraynen emphasized, it is necessary to separate from amounts of recent emissions a total quantity.

The new method of data processing considers seasonal changes of carbon dioxide depending on growth of plants and their hibernation, and also from the background level of carbon dioxide. To be convinced of correctness of a method, the team compared results to the nitrogen dioxide measurements (other gas which is emitted in case of combustion of fossil fuel) received by means of a spectrometer of Ozone Monitoring Instrument on the satellite of NASA Aura. OMI and OCO-2 are in orbital satellite group A-Train therefore two measurements cover the same area of Earth and are divided in time for only 15 minutes.

According to the coauthor of work Johanna Taminen, a research shows a possibility of the analysis of joint satellite observations of concentration and distribution carbonic and other gases connected with burning processes and receipt of data on sources of emissions.