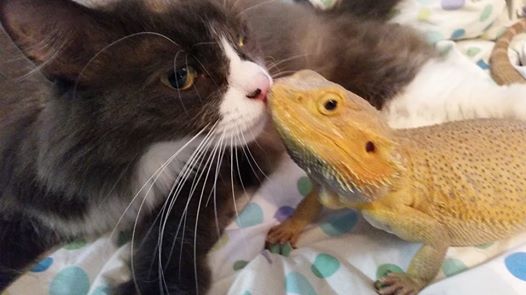 In the US the house of a resident of Pennsylvania Cheyenne Murch became friends cat Baby and a bearded dragon Charles. When 9 months ago the house was Charles, the owner feared that the cat Baby can eat it. However, instead they became friends, having conquered its extraordinarily warm relations of Internet users.

A cat and a bearded dragon does not break up, one of their favorite pastimes — together to watch out the window for birds. Friends like to do together absolutely everything — they don’t quit on walks and cuddling in the evening until until I fall asleep. According to Murch, the Pets really care about each other. Their friendship began when Charles hugged the cat four-year — since then they are inseparable.

Pogona is a genus of lizards comprising eight species. They are called bearded lizards because their neck is a characteristic pouch, which in moments of danger or mating swells up and acquires a dark color.