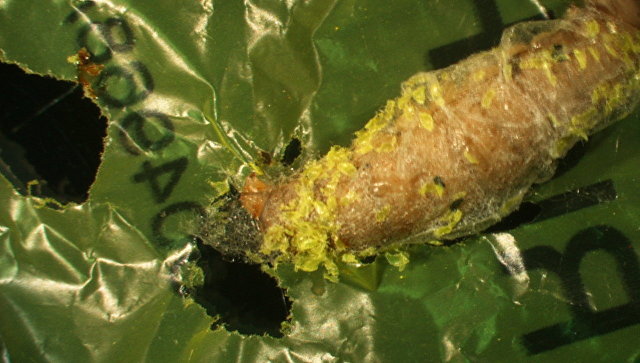 Caterpillars of the usual wax moth, devouring wax in hives of bees, were able to eat and digest polyethylene and other types of plastic, which makes it possible to use them for garbage disposal.

“We found out that caterpillars of common insects, large wax moths, can decompose one of the most resistant and chemically strong plastics – polyethylene.” We plan to adapt them to save the oceans and rivers of the Earth from contamination with particles of these materials. Now you can litter anywhere, “said Federica Bertocchini of the University of Cantabria in Santander, Spain.

Today, about 300 million tons of plastic debris fall on landfills every year, most of which is not decomposed by soil microbes and remains in almost untouched form for tens or even hundreds of years. Many plastic particles enter the waters of the world’s oceans, where they enter the stomachs of fish and birds and often cause their death.

Over the past two years, scientists have discovered several species of insects, whose larvae have been able to solve this problem. For example, two years ago, Chinese biologists discovered that the favorite dish of many visitors to Chinese restaurants – the caterpillars of floury hruschaks – can eat foam, PET and some other types of plastic. The discovery of bacteria in their intestines, capable of decomposing plastic, gave the first hope for a quick purification of the Earth of debris.

As Bertokkini says, she accidentally managed to find a “natural enemy” for the strongest and most widespread plastic – polyethylene, taking care of the bees in her garden.

In the hives of bees, according to the biologist, in addition to the bees themselves, their parasites and spongers, caterpillars of a large wax moth often live, which are not interested in honey or the inhabitants of the colony, but in the wax walls of their honeycombs. Clearing the beehive of its bees from similar caterpillars, Bertokkini put them in a plastic bag and went to rest.

When she glanced at the package in a couple of hours, she saw that the caterpillars did not give up, but “continued the banquet” and started not to eat wax, but polyethylene. Such strange appetites of insects interested in Bertokkini, and she checked whether moth larvae can really eat plastic, observing their behavior in the laboratory.

It turned out that this is really so, and that a mole can eat polyethylene at a record speed – in half a day about a hundred caterpillars ate almost 100 mg of the package, which is thousands of times faster than the decomposition of plastic with bacteria and other insects.

Scientists suggest that the organism of caterpillars, apparently, develops a special enzyme that breaks the bonds between the links of polymer molecules and turns them into ethylene glycol, which is an alcohol toxic to humans. Similar bonds are present in the polymer molecules that form the basis of beeswax, which can explain why the moth caterpillars so actively eat plastic.

While Bertokkini and her colleagues do not know which molecules are involved in this process, they are planning to uncover the secrets of caterpillars in the near future. If this can be done, a synthetic version of their enzymes can be used for processing plastic debris and cleaning the Earth’s biosphere from anthropogenic pollution.