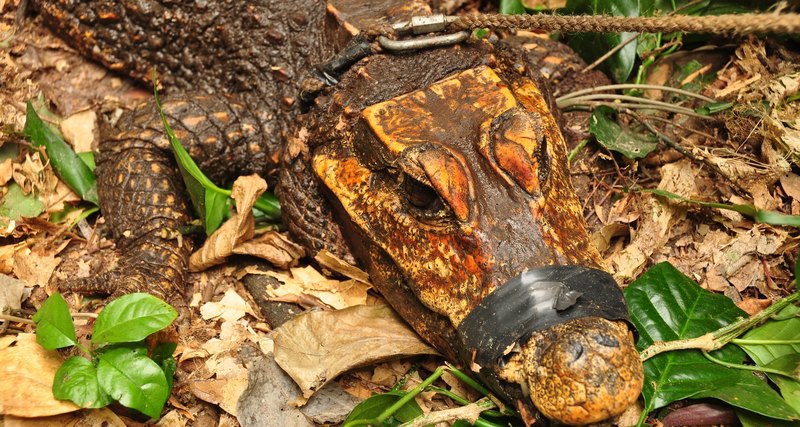 The analysis of crocodile DNA from a population imprisoned in a flooded cave showed that animals are rapidly evolving and will soon be released into a separate species.

In 2008, archaeologist Richard Osisley, who worked in Gabon in eastern Africa, was discovered in strange crocodiles: they lived not only under water, but also underground, in the flooded caves of Abanda. Two years later Osisli returned with the cave explorer Olivier Testa and the zoologist, crocodile specialist Matthew Shirley. They caught the cave crocodile, dragged it out into the light and found that it was not greenish-gray, like most crocodile, but yellow-brown, but other features most resembled the African blunt crocodile Osteolaemus tetraspis.

This year, the study of DNA cave crocodiles. It turned out that they are much farther from all other known crocodiles than scientists assumed. The toothed inhabitants of the cave of Abanda were so long isolated from the whole world that they managed to accumulate a lot of genetic changes, which with each generation more and more distinguish them from the other tusked crocodiles; it is possible that soon they will turn into a new species. say scientists.

Today we know about the only population of brown cave dwarf crocodiles. Scientists suggest that young individuals can escape from the cave through underground channels, while older and larger individuals do not pass into narrow exits and are forever locked in a cave. They feed mainly in bats, which in caves are thousands, and crickets.

Aging, cave crocodiles become yellow-brown; the researcher believes that the color of the crocodiles is given by the water of the cave, which has an alkaline reaction due to the litter of bats that sinks to the bottom day and night.

Otherwise, the living conditions of cave crocodiles do not differ much from the conditions in which their relatives live: both of them hunt in the dark (one at night, others in a dark cave) and live in warm water – the temperature in the cave does not drop below 22 ° C.