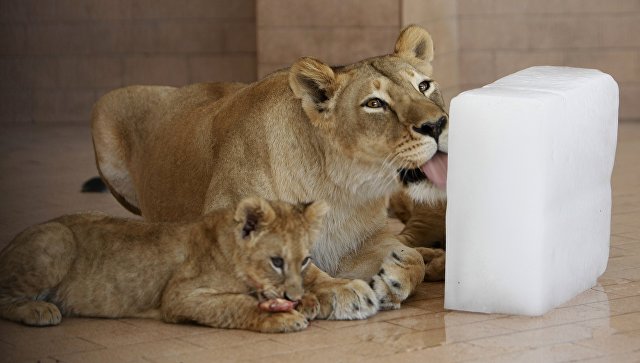 The unusual love of ancient people to their skins what the unusual find in one of caves in Spain testifies to could be one of the reasons of extinction of cave lions in Europe, paleontologists in article published in the PLoS One magazine declare.

In recent years scientists discuss more and more actively what led to extinction of mastodons, cave bears and lions, huge idlers, saber-toothed cats and other representatives of megafauna in the New World and in Eurasia which practically at the same time disappeared about 20-15 thousand years ago.

Many paleontologists believe, relying on new datings of bones of mastodons and recently opened traces of cutting of carcasses of animals that in this extinction the key role was played by the person – the megafauna seldom managed to live in the neighbourhood with people more than one thousand years. It is spoken well also that our ancestors competed for “apartments” – spacious and dry caves – with cave lions and bears.

Other researchers don’t agree with them and declare that two other things – fall of the meteorite which caused a so-called Driasovy cold snap in America and also the sharp climate changes in Eurasia connected with departure of glaciers were at least guilty of extinction of mammoths and other “business cards” of Ice Age.

Marian Cueto from university of Cantabria in Santander (Spain) and his colleagues found the unusual certificate specifying a direct role of the person in extinction of cave lions, carrying out excavation in La-Garm’s cave in mountains in the north of Spain in which the first inhabitants of Europe lived about 14-15 thousand years ago.

In this cave paleontologists found several stone structures, “huts of ancient people” recently as they are called by scientists around whom Kuerto’s team carried out excavation to find bones of animals which ancient people could eat in hope. They managed to find something other and more interesting.

As scientists tell, they found nine fragments of bones of fingers and bones of forepaws belonging to one cave lion of an uncertain sex (Panthera leo spelaea) at each of which there was an unusual pattern from scratches.

Analyzing these scratches, Cueto paid attention that he saw similar damages on other remains of animals, much fresher and not belonging to Ice Age. Similar “scars” on bones as scientists explain, can be seen almost on any carcass of a predatory animal whom hunters skinned and tried to keep on it bones of its former owner. Similarly, besides, veterinarians delete claws at cats.

All this as scientists consider, says that the cave lion from La-Garm’s cave was “scalped” similarly. Together with other certificates of purposeful hunting of ancient kromanyonets for these cats, this opening as Cueto and his colleagues consider, says that our ancestors could appreciate skins of lions and get them, despite big health hazard of hunters.

As scientists assume, the skin of a lion in this case had ritual value – in La-Garm’s cave, in addition to bones of the person, lions and other animals, scientists found a set of artifacts of presumably religious value. Possibly, cave lions could serve as a totemic animal or a subject of worship for inhabitants of a cave and its vicinities during the Stone Age. Hunting for them and fight for the habitat could serve as one of the main reasons of their extinction, scientists conclude.