Cemetery of extinct 50,000-year-old cave bears found in grotto where no man has ever set foot 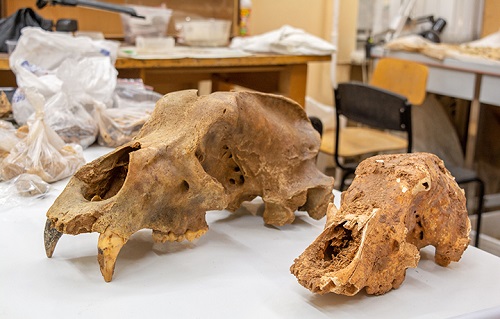 Paleontologists found more than 300 ribs, vertebrae and intact tubular bones of the long-extinct species. Previous finds of bear remains in caves in this vast region had been disturbed by ancient man.

“The integrity of the bones in all of these caves was disturbed by human activity before the scientific study began,” said senior researcher Dmitry Gimranov of the Institute of Plant and Animal Ecology at the Ural Branch of the Russian Academy of Sciences.

“In Prokoshevskaya Cave we have an opportunity to study the intact structure of the ‘natural cemetery,’ to get unique information about the ecology and biology of that era.”

A total of 18 bear parts have been found in the Permian cave, with more females than males. Reportedly, some of them died during hibernation.

An analysis of their teeth will allow experts to determine the diet of the cave bears.

The cave has a 350-foot main passage that ends in a 25-foot cliff that leads to an underground grotto, where a necropolis of bears was discovered.

In the video, Dr. Gimranov holds a cave bear with a massive jaw; the bear, he says, lived about 40,000 years ago.