CERN wants to build an even bigger collider 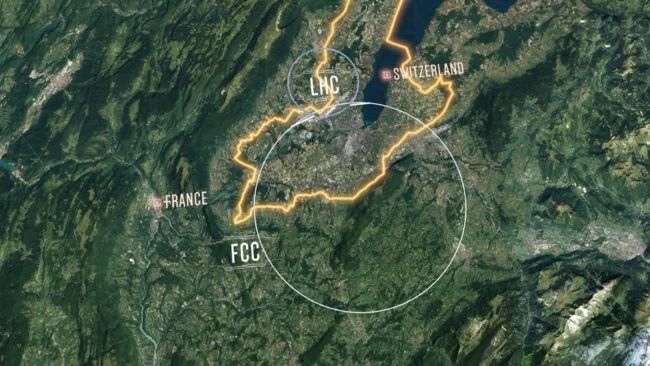 Colliders – quite a natural phenomenon, which is often found in our Universe. Particles collide and split in stars and black holes at energies that are difficult to even imagine. However, pride wakes up when you realize that a person is trying to build something similar. Today, the research center, which brought us news of incomprehensibly tiny particles awarded the Nobel Prize, announced plans to become much more.

The European Organization for Nuclear Research (also known as CERN) already has the pleasure of using the largest and most powerful particle accelerator in the world – the Large Hadron Collider. But today a report was published, which considers the design of a larger and more powerful potential successor – the Future Circular Collider (FCC).

With the help of the Large Hadron Collider, the Higgs boson subatomic particle was discovered in 2012, and much more. But to study even more elusive aspects of the Universe, in the opinion of many physicists, we will need a newer and more powerful tool.

The Large Hadron Collider has a length of about 28 kilometers, but its replacement will be four times as much – up to 100 kilometers. This is enough to surround the whole city of Geneva.

Particle boosters need sizes to disperse tiny bits of atoms to near-light speed before they collide. The resulting collisions give researchers a better understanding of the laws of physics. The future circular collider, with its more powerful mechanism and a longer tunnel, will be able to observe particles that remain invisible to modern technologies.

It is expected that the Large Hadron Collider will be operated at least until 2035. But the scale of the construction of his successor is so great that you need to plan ahead. The concept of the Large Hadron Collider was introduced in 1984, approved in 1994, but opened only in 2009. From the moment of the beginning of realization and up to the last experiment, the history of the Future Circular Collider is expected to stretch for seven decades.

Today’s report is a conceptual project for the Future Circular Collider, a four-volume work on which 1300 scientists have been working for five years. It outlines several possible constructions of the future collider that particle physics will keep in mind, setting goals for their research for the next few years.

The BAC has already given researchers a lot of food for work, but also left riddles. Now the collider is going through a planned upgrade, but the researchers would still like to get a better understanding of antimatter, learn more about the nature of dark matter and where to find it, and also find out why the Higgs boson is much better than expected. Only a bigger car can answer these questions.

The project of the future circular collider reveals several different potential aspects of the object. There will be a huge tunnel that will allow fine beams of particles to move without the need to travel along curves that are as tight as at LHC. There will be a lepton collider that can push leptons together. This, in theory, will provide scientists with more accurate measurements of Higgs and other particles that they are just beginning to understand. There will also be a large Hadron Collider, which can push the particles together at even higher energies.

According to CERN, the construction of the tunnel will cost 5 billion euros, plus another 4 billion euros will be needed for the initial lepton collider until 2040 and another 15 billion for the hadron collider, which will replace the first one and start work in 2050. The same approach was followed with the LHC.

This is a huge amount of money, of course. Many scientists would prefer to invest them in medicine or the fight against climate change. Money for CERN projects comes from 22 states and institutions that use facilities. However, many physicists believe that the investment will be worth it.

Even Peter Higgs said: “We have scratched the surface, but definitely more to be discovered.”