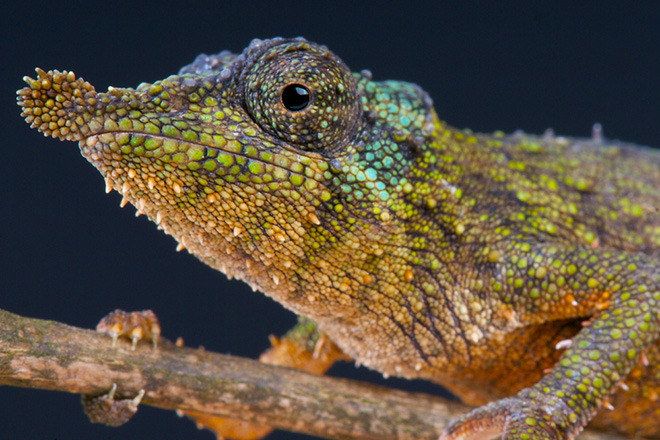 Researchers from Brown University in Providence (Rhode Island, USA) found that the language of dwarf chameleons is one of the fastest on the planet. Chameleons are able to accelerate their tongue up to 100 km per hour for the hundredth of a second. For comparison: Tesla Model S supercar accelerates to 96 km in three seconds.

The tiny chameleon of the species Rhampholeon spinosus living in Tanzania does not seem to be strong and fast at first glance. The average body length of a chameleon is only 16 mm, but the tongue is 2.5 times the length of the body. During the last study, it turned out that the Rhampholeon spinosus language is one of the most powerful and fast mechanisms on Earth. Acceleration of the tongue with an ejection of 264 times the acceleration due to gravity.

To study the Rhampholeon spinosus chameleon, lead author Christopher Anderson used a high-speed camera that takes three thousand frames per second. Thus, scientists managed to trace in all details how a chameleon catches crickets with the help of its ultrafast language. High speed is achieved at the expense of elastic tissues at the base of the tongue: before ejection, they stretch like a slingshot, and then relax and shoot the tongue, thus informing it of a huge amount of potential energy.

Anderson established an interesting pattern: the smaller the chameleon, the greater the speed and power developed by its language and the greater the length of the tongue relative to the length of the reptile’s body. “Previously, our colleagues studied the speed and power of language movement in larger chameleons, and the results were very modest,” said Anderson. From an evolutionary point of view, this pattern is quite logical, because the smaller the animal, the higher its metabolism and the greater the amount of food must be consumed.

Note that, despite the impressive performance, the language of the chameleon Rhampholeon spinosus is not the fastest among the animals of the planet. The leadership palm belongs to a species of mushroom-speaking salamander of the genus Bolitoglossa. However, as Anderson points out, salamanders are significantly larger than dwarf chameleons.