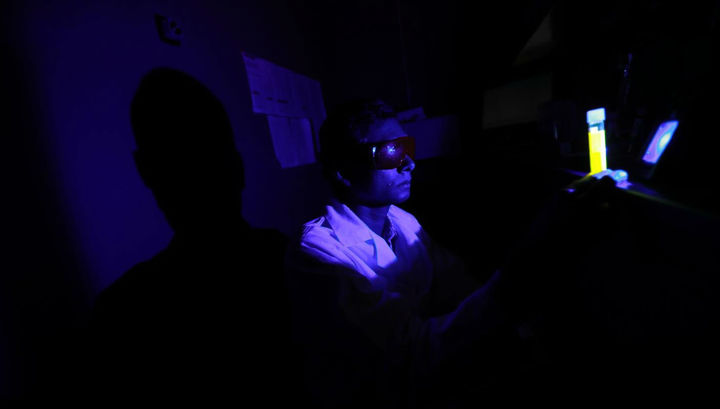 Despite the fact that dozens of scientific works are devoted to the negative influence of the screens on man, modern people spend more and more time “in company” with TV, computer and smartphone. However, it is worth noting that until now it remained unclear how exactly the light of the display contributes to the deterioration of vision. But now chemists from the University of Toledo have finally discovered the mechanism by which blue light emanating from digital devices transforms the molecules contained in the retina into real cell killers.

The most important role in the vision process is played by retinal – one of the forms of vitamin A. This substance is part of the main visual pigments and is involved in creating nerve signals, from which the brain forms an image. And since without retinal photoreceptors become absolutely useless, it must be constantly produced in the retina of the eye.

In a new study, a team led by Ajith Karunarathne found that under the influence of blue light, retinal triggers reactions in which substances that are toxic to retinal cells appear. It is this process that leads to age-related macular degeneration, when the immune system gradually ceases to protect cells from destruction.

In the course of the experiment, scientists injected retinal into various types of cells, including cardiac, cancerous and nerve cells, after which they acted on the samples with light of different wavelengths. And each time under the rays of the blue part of the spectrum, the cells died, while other types of illumination did not have a negative effect.

“It’s really toxic.” The photoreceptor cells of the eye do not recover, and when they die, it’s forever, “co-author of the study Kasun Ratnayake explains in a university press release.

But there is good news: it turned out that the antioxidant alpha-tocopherol, a vitamin E derivative, saves the retinal antidotes. Unfortunately, with time, when the body begins to age or when the immune defense weakens, the ability to fight with the influence of blue light thus disappears.

Only in the United States each year there are two million new cases of macular degeneration – a group of diseases in which retinal damage occurs and central vision is impaired. Understanding how the ubiquitous blue light affects human health gives hope for the development of ways to protect the younger generation in the world of high technologies.

Currently, researchers measure the intensity of light coming from the screens of various devices to simulate the response of the eye cells to the natural exposure that people face in everyday life.

According to Karunaratne, you can protect yourself from natural blue light with the help of sunglasses that filter out these waves together with ultraviolet light. In addition, many gadget manufacturers now install the appropriate software filters on their new devices. For old device models, programs that filter out the blue component can be installed by users themselves.

More details of the research results can be found by reading an article published in the Scientific Reports.