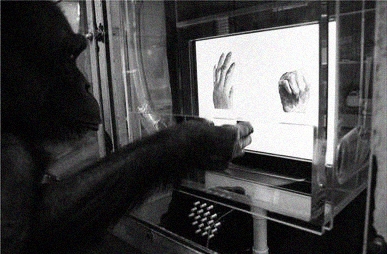 Primatologists from the University of Kyoto, checking whether chimps (Pan troglodytes) can solve complex problems, taught them to play “stone, scissors, paper.” It turned out that monkeys can learn to play it, and play about the same accuracy as four-year-olds. The study is published in Primates.

To date, many studies have been published on the study of the intelligence of chimpanzees. These monkeys use tools to get their food and successfully teach this skill to their offspring. They can independently learn completely non-practical things that do not help them to get food, but only entertain. Numerous experiments have shown that chimpanzees (like other anthropoid apes) are able to communicate in the American language to deaf and dumb ones. They can learn it at the level of a two-year-old child and teach him other monkeys.

Japanese primatologists decided to find out whether monkeys can learn to solve non-linear problems, but more complex “circular” ones. They have several elements, each of which can be “stronger” than the others, and their “roles” can change. For example, as in the game “stone, scissors, paper.”

The researchers conducted experiments involving seven chimpanzees of different sex and age who live in the Primates Center at Kyoto University. Monkeys were taught to choose the “stronger” option on the touch screen first in a pair of “stone-paper”, then in a pair of “stone-scissors”, and lastly in a pair of “scissors-paper”. Then they were shown a sequence of pairs: “stone-paper”, “stone-scissors”, “scissors-paper”. After the chimpanzees learned the “relationships” in each pair and assimilated their sequence (they gave the correct answer in 90 percent of the cases), they were shown pairs in a mixed way. Then the same experiment was conducted with 38 children aged from three to six years.

As a result, five of the seven chimpanzees have learned to correctly identify pairs. Most of the time (an average of 14 sessions, 48 ​​attempts in each), monkeys needed to learn the third pair – “scissors-paper.” The first (“stone-paper”) and the second (“stone-scissors”) pairs they learned, on average for 1.7 and three sessions, respectively. From this, the researchers concluded that the most difficult thing for chimpanzees was to understand that the pairs are located “in a circle” and “close” the circle with a third pair.

34 of 38 children successfully learned to play “stone, scissors, paper”. Children for all three pairs took about the same number of attempts. On average, 6,7 sessions for 12 attempts in each for the first pair, 6 sessions for the second, and 5 for the third. However, their results depended on age: the older children were, the more number of correct answers they gave. Children aged about 50 months (four years and two months) when they were shown pairs of objects mixed, gave approximately the same number of correct answers as chimpanzees.

Previously, researchers found that chimpanzees are capable of reflection: they track when they were right, and in which cases they were wrong. They can also realize that the thoughts and beliefs of other individuals may differ from their own.