Chimpanzees teach their young to fish 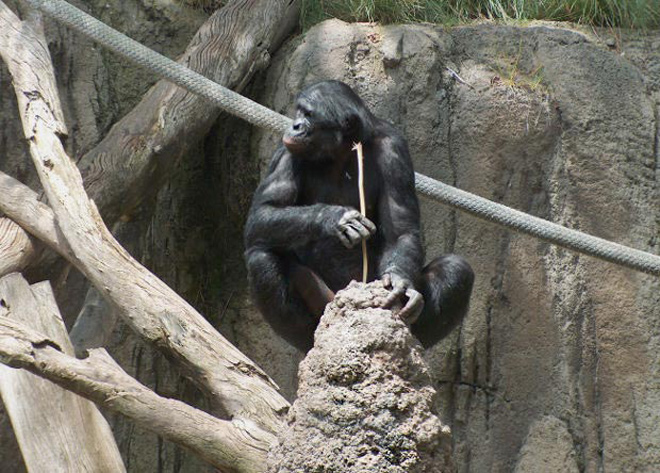 In the course of observing chimpanzees in the wild, scientists found that the animals not only made of blades of the tool performing the function of “rods”, but passed it on to their cubs in order to teach a useful skill.

To determine whether the behavior of chimpanzees learning the character was used previously formulated criteria applicable to all animals:

— “student” present at demonstration behavior
— teacher acts selflessly, without receiving immediate benefits and sacrificing your resources for the sake of learning kinsman
— the behavior of “teachers” helping “student” to learn new skills
— teacher corrects their behavior depending on the results of the “exam.”

Monitor the population of chimpanzees in the national Park Nouabale-Ndoki in Congo showed that intelligent animals you catch termites very entertaining way. Primates found special types of grass, razocharovala their ends and thus received a kind of “fishing rod”. Then the monkeys were bored in the termite mounds with a stick and shoved a “rod” into the hole. Due to the tassel at the end, they fished termites more than the usual blade of grass.

In addition, the animals passed on their tools to other individuals. The authors of the new study decided to find out for what purpose they did — just like that or to teach relatives “fishing”. The scientists filmed the primates coming to the termite mounds. After watching hundreds of hours of footage were allocated 96 cases of transfer of “rods”. From them were selected the 57 episodes that are more likely to demonstrate the learning process, as the female gave her cub blade of grass.

Data analysis showed that adult chimpanzees that had given up their rods, spent less time on insect prey and, consequently, was satisfied with a smaller catch. The cub, received a generous gift from the female started to hunt on their own and spent twice the hours for “fishing” and food. According to scientists, this behavior meets the criteria of the study were preliminary demonstration of the skill, and the sacrifice delicacy in favor of “student”, and the assimilation of “lesson” cub.

Some experienced individuals have acted more wisely. In four cases, chimpanzees have stocked up a few blades of grass to share them without damage to itself. And eleven females were split gun along the stem, thereby obtaining two “rods”.

Scientists will continue to explore the learning behavior of animals, to determine the period of its evolutionary development. The symptoms of learning was discovered in the behavior of meerkats, ants and birds.