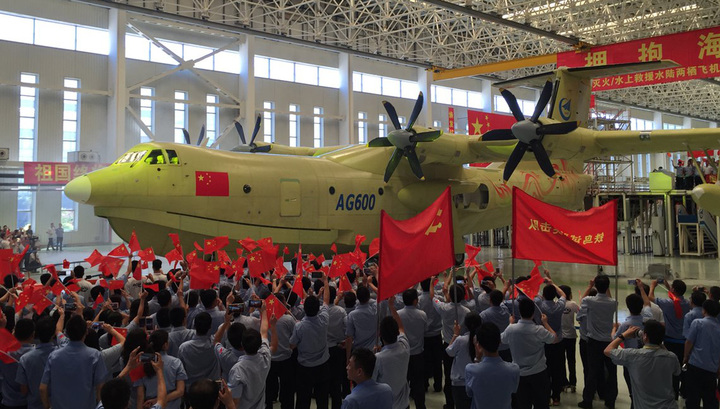 The size of the aircraft exceed all current “flying boats”, so this plane may be called the greatest among amphibians. In length reaches the plane of 39.3 meters, and its wingspan is only slightly less than – 39 meters. Take-off weight of the machine (depending on sources) is called from 53.5 tons to 60 tons. On the wings of the plane four WJ6 turboprop engines in China, which is a copy of the Soviet AI-20 engines, takeoff power on 5100 HP each.

Characteristics of the machine exceed those existing models in the world of seaplanes, like the Japanese ShinMaywa US-2, the Russian be-200 and the canadian Bombardier CL-415. Truly “Water dragon” can measure the characteristics only of the Soviet A-40 “Albatross”. However, in 2012 the project was closed and, despite claims about the revival in 2016, the actual prospects of the “Albatross” is very vague.

Already aware of the development of two versions of Chinese flying amphibious search and rescue and fire. In the rescue version of the aircraft is able to carry up to 50 people, and in fire to 12 tons of water.

The programme for the development of seaplane AG600 officially launched in 2009, although, as noted bmpd actual work on the project continued from the end of 80s of the last century. According to the official information of the investment in the project amounted to 3 billion yuan (nearly half a billion dollars USA). In the design and manufacture AG600 involved about 150 institutes and research centers and 70 industrial enterprises of the PRC.

In the future, the manufacturer promises to expand the list of modifications. The AVIC also did not rule out the creation of a military version of the “Water dragon”. Given China’s territorial claims to all its neighbors and, primarily, to the Islands in the South China sea, there is not the slightest doubt that the military specification will appear first others.

At the moment we know already about the package of 17 orders for amphibious aircraft AG600 from Chinese customers.