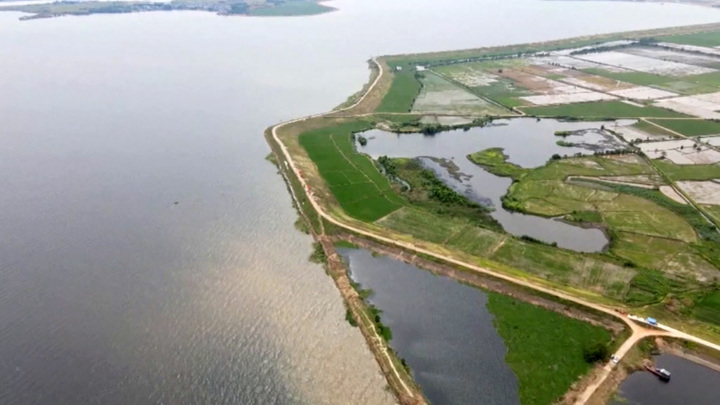 China continues to flood. Several million people have already suffered from the disaster. And now the water is not receding. For example, in Wuhan, a fortification is being prepared so that the dam will not burst. The Chinese authorities have calculated the damage from the flood at $ 12 billion.

Rescuers walk around the surviving houses up to their waist in water. After all, those who did not manage to leave them in time were trapped as if. In the province of Anhui – perhaps the most critical situation. From the south lies the full-flowing Yangtze, from the north – Huaihe. Large water covered entire cities.

In ancient Nanjing, the first floors are not visible at all. In the multimillion-dollar Lanzhou, the Yellow River overflowing the banks of the river seethes where, until recently, there were wide interchanges. In Poiana, buildings could not withstand the pressure and collapsed. “We had two children here, and four old people, if the military hadn’t arrived on time, I don’t know how we would have done it!” Residents say. “Thank them very much!”

In the disaster zones – and this is already 27 Chinese provinces – the authorities are sending more and more troops of military and rescuers. They reinforce dams around the clock, constructing barriers and embankments from sandbags. The roads are blurred. Heavy equipment paves the way for salvation. “We are now urgently creating a reserve reservoir for 160 million cubic meters to relieve pressure on the main dam. It should help,” said rescuers.

On dams, including the country’s largest hydroelectric power station “Three Gorges” near Wuhan, water is urgently dumped, the level of which has long been higher than the critical one. Otherwise, it will break through – and a disaster. In order to somehow reduce the pressure, some plates even have to be blown up.

“Here, in addition to heavy downpours, the wind was so strong that it raised waves that hit the dam so that if this continues, it will surely collapse,” warns Chun Chun, head of Fenggang City.

Where the water has finally receded, mountains of mud and debris remain. In the shops, merchants are trying to find at least something that has survived. “We thought it would fill everything up to a maximum of one meter – like the last time, we raised the goods to the upper shelves,” says one of the sellers, Wu Hongyu. “But it turned out that nothing was left.”

“For small businesses, this is generally a fatal blow,” says Zhang Shangshan, secretary of the Sejiatan city party committee. “Not only did they suffer huge losses because of the epidemic, then at least the goods were intact. And now this flood is a complete ruin.” According to various estimates, the preliminary damage from the disaster alone amounted to $ 10 to 15 billion.

Forecasts of weather forecasters are disappointing. Showers will continue in the east, south, and center of China, where more than four hundred rivers have already overflowed the banks. Beijing is also preparing for a flood, just in case.