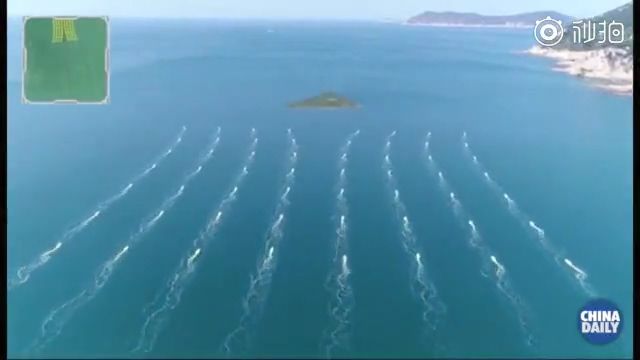 The testing of the fleet of surface robots was reported by the publication of Huanqiu. Robots demonstrated their abilities in the South China Sea, not far from the Wanshan archipelago.

Tests conducted by the company Yunzhou Intelligence Technology, they have become one of the largest and most complex tests of marine unmanned systems in history. During the check, the robots walked in several wake columns. The video shows how they bypass the vessel in which the operator is located, and then restore the system.

It is reported that during the tests, Chinese specialists simulated bypassing obstacles, including the passage between the pillars of the bridge. You can also see the artistic elements of the program, in particular, the creation of the silhouette of the aircraft carrier.

Islands in the South China Sea – the subject of territorial dispute between the PRC, Taiwan, the Philippines and a number of other countries. Now, about 40% of world trade traffic passes through the sea, and it also transports up to 80% of Chinese oil and gas imports.

It is worth noting the significant progress of recent years, achieved immediately in several areas related to unmanned vehicles. These tests in the South China Sea would have been impossible without new methods of group interaction. Let’s remind, recently 1300 dancing robots have established a new world “dance” record. Spectacular show was held in Italy. The event was attended by a judge of the Guinness Book of Records, Lorenzo Veltri, who recorded the events.

The record was set with the help of robots Ubtech Alpha 1S: such devices can be found in free sale, their cost is relatively low. This model is characterized by extremely high flexibility, which allows you to perform a variety of actions. The robot has 16 patented servo drives, thanks to which its movements are very similar to human ones. You can use your smartphone or tablet to manage your device.

In addition, significant progress is being observed specifically in the field of marine unmanned systems. You can also recall the project of the Russian unmanned submarine “Status-6”. However, even more revealing is the US-built unmanned ship “The Sea Hunter”, whose main task is the search for enemy submarines. Presumably, an unmanned ship will be able to operate autonomously within 60-90 days. Its length is 40 meters.