China will take part in the battle of giant combat robots 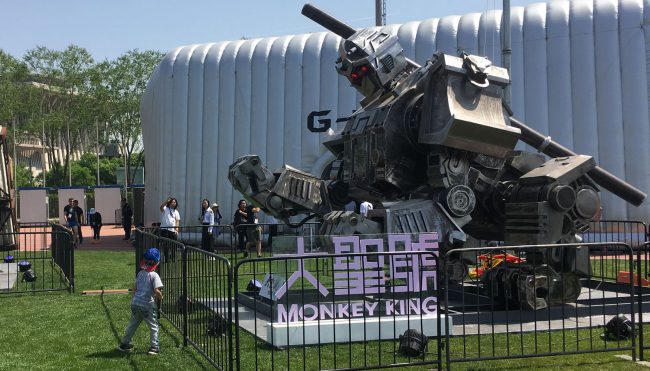 In August this year, a grand duel of two giant robots will take place. In the blue corner of the ring is a 12-ton American robot Mk.3, and in the red corner – the brainchild of Japanese engineers called Kuratas. The spectacle promises to be incredible, given how much effort was invested in the development of these two hefty combat vehicles. But the most surprising is that Chinese specialists decided to take part in an unusual event. As it turned out, they are actively preparing for the battle of their robot Monkey King.

The idea to organize spectacular fights between giant combat vehicles came to the head of the employees of the California startup MegaBots. Purposeful children devote all their free time to the development and improvement of their metal monsters, and not so long ago, even announced the creation of the world’s first sports league of combat robots with the support of members of the Olympic Committee. The enthusiasm of Americans is shared by their Japanese colleagues from the company Suidobashi Heavy Industry, who created an impressive robot Kuratas. But the inclusion in the “arms race” of China for all turned out to be an unexpected turn. Who will fight on the part of the Celestial Empire?

The robot Monkey King was created by specialists of the Chinese robot-making company Gunmetal. The first prototype of the combat vehicle has already been completed and at the moment the engineers are actively improving the design. The uniqueness of the Monkey King design allows him to fight as if standing on two legs, and resting all four limbs on the ground in the likeness of an animal. Representatives of MegaBots were overwhelmed by the announcement from their Chinese counterparts, so at the moment the question is being decided on exactly how and against whom to organize his first fight. Most likely, this will happen after the first historic battle between Mk.3 and Kuratas in August ends.