China’s electric car strategy is starting to go global – and the U.S. is lagging behind 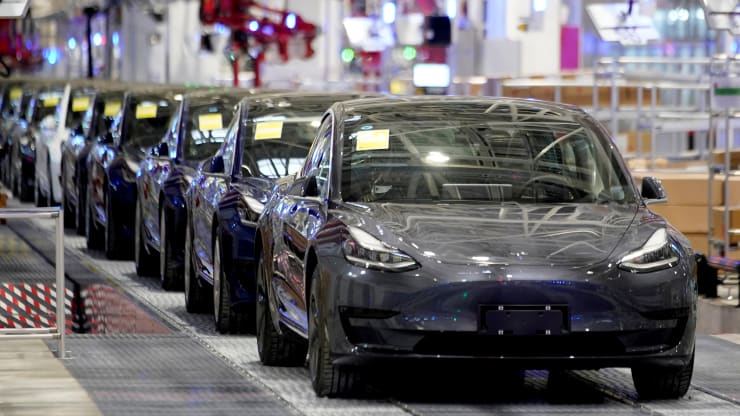 In a future driven by electric vehicles, China is poised to dominate if the U.S. does not transform its automobile industry in coming years.

While California-based Tesla captured popular attention for electric cars, national policy in Beijing encouraged the launch of several rivals in China, the world’s largest auto market. Already, sales of electric cars and other new energy vehicles hit a record in September in China. Even Tesla launched a factory there last year, and is planning to sell made-in-China cars to Europe.

Powering it all are electric batteries – of which two Chinese companies, Contemporary Amperex Technology (CATL) and BYD, account for about a third of the global market, according to UBS. All six of the major battery manufacturers identified by UBS are Asian.

“Over the next five years we anticipate Chinese players across the EV supply chain to aggressively enter the overseas market,” UBS analysts wrote in a note Wednesday. “We believe China materials costs are lower than the overseas market. If this advantage can sustain, China could realize a cost advantage over ex-China players.”

The researchers expect CATL to increase its share of the ex-China market from 2% in 2019, to 14% in 2025, helped by “hyperbolic” growth of electric vehicles in Europe.

Once a fringe item in a global energy market centered on oil, electric vehicles are part of a potential new ecosystem that includes self-driving cars and ride-hailing. Daniel Yergin, author of the 1992 Pulitzer Prize-winning book “The Prize: The Epic Quest for Oil, Money & Power” laid out the implications of electric vehicles for geopolitics in his latest book out in September: “The New Map: Energy, Climate and the Clash of Nations.”

“Many things are starting to be seen through this new lens of competition,” Yergin said. “And if the U.S. really goes big on electric vehicles, inevitably there will be more of a drive to have the supply chain in the U.S. But it’s not separate from the overall trade tensions between the two most important economies in the world.”

The U.S. and China have been locked in trade tensions for more than two years, which have spilled into technology and, to some extent, finance. As the world struggles to emerge from the coronavirus pandemic, ensuring the future of the local automotive industry is even more critical for both economies.

In the U.S., the industry supports 10 million jobs and contributes nearly 3.5% of national GDP, according to the House Committee on Foreign Affairs Republicans’ “China Task Force Report” out on Sept. 29.

In China, the auto sector accounts for about one-sixth of jobs and roughly 10% of retail sales, according to official figures for 2018 compiled by the Ministry of Commerce.

In just one sign of how far ahead China has progressed in electric vehicle development, out of 142 lithium-ion battery megafactories under construction globally, 107 are set for China, versus nine in the U.S., according to the report “The Commanding Heights of Global Transportation” released last month by Washington, DC-based advocacy group Securing America’s Future Energy (SAFE).

“Nearly every major automaker is taking transportation electrification seriously, and they are investing heavily in the technology,” the report said. “Across the industry, automakers will invest $300 billion over the next five to 10 years on EV development and production. Tellingly, nearly half of this investment spending will occur in China—an indicator of where the industry believes demand will be.”

China’s push into electric vehicles began just over a decade ago, spearheaded by a former engineer for Audi named Wan Gang. While more than 30 billion yuan ($4.54 billion) in subsidies attracted many worthless start-ups, a handful survived. Nio listed in New York in 2018 and has climbed more than 340% since. Li Auto and Xpeng went public in the U.S. this year and their shares are up more than 65% and 35%, respectively.

Shenzhen-listed CATL shares are up more than 110% this year. Hong Kong-listed shares of Warren Buffett-invested BYD have soared more than 250% to record highs after the release of its in-house blade battery technology, which is primarily used in the company’s newly popular Han luxury sedan.

″(U.S.) dependence on OPEC at its height – in the 40% that OPEC produced of world (oil) – was never as high as it currently and is likely to be (on China) if we do nothing on China with EV and its component parts,” SAFE President and CEO Robbie Diamond told CNBC in a phone interview last month. “As an organization we don’t want to go from, dependent and (facing a) national security, economic security risk based on the Middle East and OPEC, to then a problem, I’m dependent on batteries and transportation technology from China.”

Through deals with mines and other industry players, China has secured the minerals and key materials for battery  production for at least the next five years, said He Hui, senior researcher on China’s new energy policy at The International Council on Clean Transportation.

She noted that there is relatively more cross-border collaboration among manufacturers in the electric vehicle industry so far, and that the future of the industry going forward will rely more on making batteries cheap enough so that consumers will want to switch over to electric cars.

Analysts generally expect that in about four years, battery-powered electric cars will cost the same as ones driven by an internal combustion engine.

By 2030, McKinsey estimates more than a third to almost half of vehicles sold in China and Europe will be battery-powered and plug-in hybrid electric vehicles. The anticipated market share for the U.S. is far lower at roughly 17% to 36%, up from 3% this year.

— CNBC’s Will Koulouris contributed to this report.