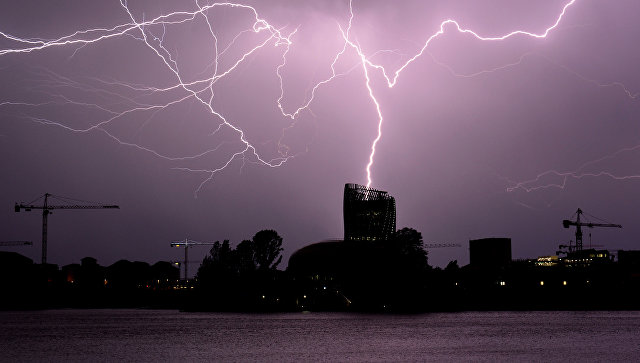 Scientists from China and the United States created the smallest and shortest lightning on Earth, observing the appearance of plasma clouds and discharges between two microelectrodes. Their conclusions and photographs of “nanomolnii” were presented in the journal Physics of Plasmas.

“Understanding how electrical discharges and breakdowns occur in the air and other gases is extremely important from a practical point of view.” Microplasma can be used to create “flat” light emitters, medical devices, internal combustion engines and ultraviolet discharge lamps, ” – Guodong Meng (Guodong Meng) from the University of Xi’an (China) tells.

The nature of lightning was unraveled in 1749 by the American naturalist Benjamin Franklin. He found experimenting with lightning rods and kites that lightning is an electrical discharge between thunderclouds and the earth’s surface.

At the beginning of this decade, thanks to the research of Russian physicists, the picture became more complicated. It turned out that cosmic rays are involved in the birth of lightning, acting as a “trigger” for flashes of electricity. In addition, data from the “Chibis-M” satellite indicated that lightnings represent multilevel structures, so-called fractals, the physical properties and arrangement of micro-cells are identical to the entire lightning as a whole.

Maine and his colleagues studied another example of such structures – the so-called breakdowns, discharges of electricity that arise in gaseous media in much the same way as lightning. A well-known example of such man-made “lightning” is the electric arc in the welding machine or spark in the spark plugs.

Scientists, as Maine points out, know quite well how such “normal” -type discharges behave, but the behavior of more miniature “lightning” remains a mystery to physicists.

The authors of the article took the first step towards revealing the secrets of such discharges, creating the smallest lightning on Earth, whose length was only 1-10 micrometers. To do this, scientists created a power plant capable of producing very short current pulses with a voltage of 5 kilovolts, and connected it to a camera capable of receiving images every 2 nanoseconds.

They connected the current source to two tungsten electrodes installed in the laboratory in such a way that the distance between them could be changed to an accuracy of several hundred nanometers. Moving these electrodes and changing the voltage on them, scientists tracked the conditions under which lightning occurred and how the properties of the air changed when they were born. 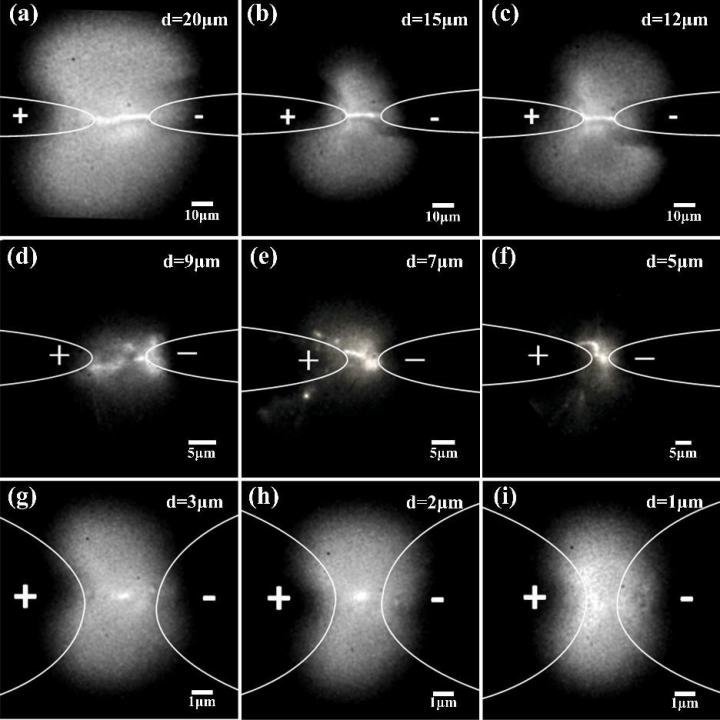 Photo of a miniature zipper

These observations have shown that such flares are produced because free electrons that “float” in the air between the electrodes are accelerated by the action of electric fields and collide with neutral molecules. They knock out even more electrons from them that collide with other atoms, giving rise to a kind of “avalanche” of ionization. Eventually, the neutral gas is converted into a plasma through which the current can flow.

Such a scenario of the birth of micromolnos, as physicists note, on the whole corresponds to the current theoretical ideas about their nature, although some interesting and unexpected things they managed to uncover.

For example, it was found that the minimum voltage required for lightning to appear remains approximately the same at small electrode spacing, but it begins to increase dramatically after the distance reaches a mark of 10 micrometers.

This, according to Maine and his colleagues, suggests that the breakdown occurs when electrodes are close to each other, not only because of the appearance of an “avalanche” of electrons, but also for some other reasons that are yet to be revealed. Their study will help protect computer chips from breakdowns, and create devices that use “nanomolnii” in their work.