Cicadas appeared in the USA four years ahead of schedule 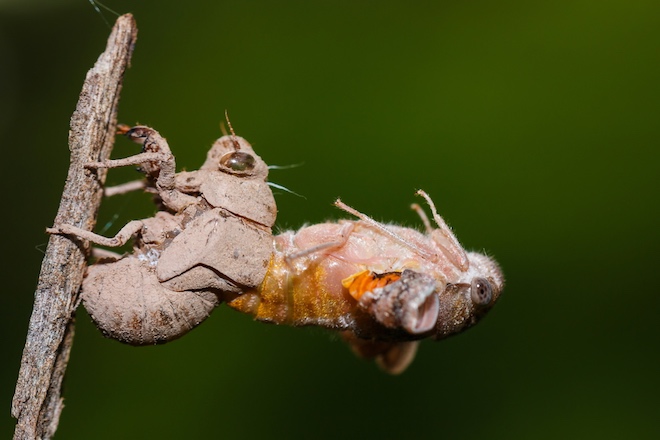 Periodic cicadas with a 17-year life cycle appeared four years ahead of schedule. Scientists had expected their appearance only in 2021, but over the past few days, reports of cicadas began to come from various American states. In particular, the appearance of these insects recorded in Tennessee, Washington, DC, Ohio, Delaware, Indiana, Kentucky, Pennsylvania and New Jersey.

Researchers believe that these cicadas belong to the so-called brood X, which is recognized as the largest of the seventeen-year-old broods of periodic cicadas, Reuters reported.

Some experts suggest that cicadas have congenital “molecular clocks” and time they determine, based on changes in the biology of the tree, the roots of which they feed. Probably, the peculiarities of weather conditions in North America in recent years have led to malfunctions of these “internal clocks” in some insects. It is also known that cicadas appear only after the soil temperature rises to 64 degrees Fahrenheit (about 18 degrees Celsius).

Nevertheless, according to experts’ estimates, no more than 10 percent of the total number of nymphs from brood X will appear before the term. If in the next few weeks a large number of cicadas appear and successfully couple, then, according to scientists, it will be possible to talk about creating a new Brood of cicadas. In this case, their next appearance will be in 2034.

It should be noted that periodic cicadas represent absolutely no danger to humans. To adult plants, the invasion of these insects, which usually appear immediately in large quantities, is also not terrible, but young plants can suffer – both directly from eating cicadas and from damages caused by females of these insects during the laying of eggs.