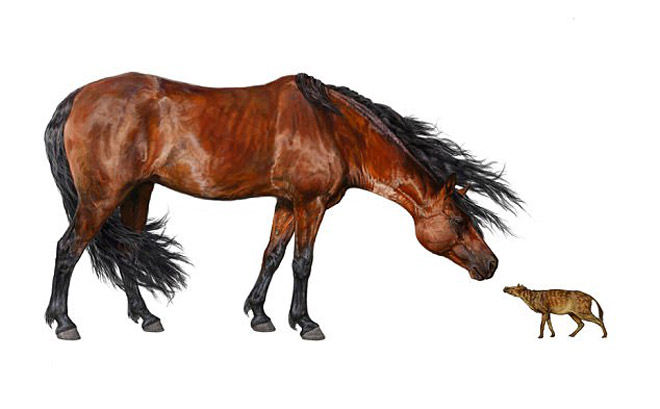 Fifty six million years ago, about 10 million years after the disappearance of the dinosaurs, something strange happened to our planet. It was getting hot. Really hot. Hotter than ever since the formation of the Earth.

Carbon footprints in the geological record show that the global temperature rose 5-8 ° C for 10,000 years and remained elevated for another 170,000 years before returning to normal.

Scientists call this relatively rapid temperature rise a “hyperthermal event,” and it was not the only one. After about 2 million years, the Earth experienced another burst of temperature, about half as weak as the previous one. There were others, less serious. Most scientists agree that we are now in the middle of this period.

Abigail Ambrosia, a graduate student at the University of New Hampshire, is interested in what happens to living things at global temperature jumps. Are they dying out? Adapt? Change?

Her research, published in the journal Science Advances, shows that at least some mammals in global warming decrease in size. And, it turns out, the degree of reduction of their bodies is directly related to how warm the planet becomes.

The results are based on an analysis of fossil teeth and jaw fragments collected from the Bighorn Basin in northwestern Wyoming, about 80 miles east of Yellowstone National Park. “The size of the teeth is an excellent indicator of the body size of an adult mammal,” explains Ambrosia.

Comparing the changes in tooth size of the same species over time, the researchers found that during the most significant ancient warming, about 56 million years ago, an “epidemic of dwarfism” occurred among mammals.
The earliest single-braided Sifrhippus for the first 130,000 years of warming decreased by 30%. As the global temperature normalized, they grew by 76%.

Ambrosia wondered whether this occurred with a weaker warming 54 million years ago. To find out, she set about collecting and measuring the teeth of four mammals that lived before and during this event: Arenahippus pernix (an early horse the size of a small dog), Diacodexis metsiacus (the ancestor of pigs and deer the size of a rabbit), Hyopsodus simplex (Herbivore the size of caress) and Cantius abditus (an early primacy similar to modern lemurs).

The analysis revealed an obvious difference in the size of the teeth of horses that lived before and during warming. During the second event, Arenahippus decreased by an average of 14%.

This response to climate change was proportional to the scale of warming. During the first event, the horse decreased by 30%. In the second, which was half as intense, the other horse became 14% smaller. Diacodexis, the predecessor of the deer, is 15%, the herbivore Hyopsodus – by 4%. The primacy of Cantius overcame this trend, showing an increase of 2%. However, none of the last two results was significant.

What is the reason for this? Most likely, with the regulation of body temperature under different conditions. Large animals more effectively retain heat, and small animals give. Therefore, the former are more common in a cool environment, and the latter are warmer.

For example, red foxes living in colder high latitudes are larger than those closer to the equator. This phenomenon even has its name – Bergman’s rule.

However, the author added that animals that survived the ancient hyperthermal events could lose size for other reasons, including lack of food. As the planet continues to heat up today, scientists will be able to observe in real time what is driving this process.