Climate change can increase the number of children with congenital heart disease. 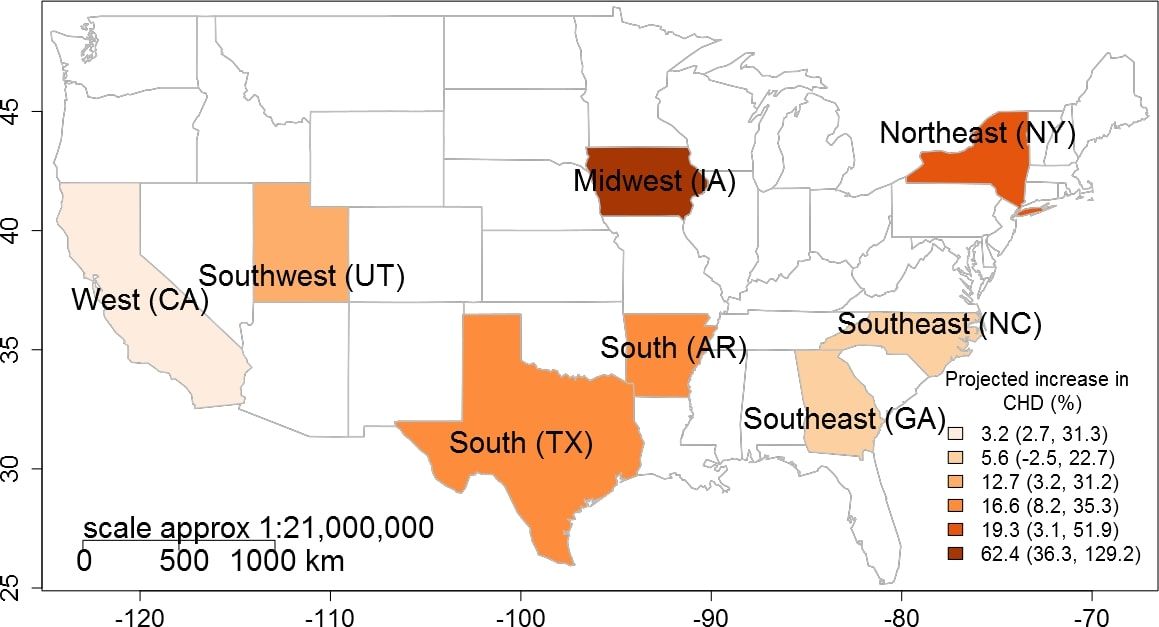 The increase in temperature caused by global climate change may increase the number of children with congenital heart disease (CHD) in the United States over the next 20 years and will lead to seven thousand additional cases over 11 years in some regions.

Such conclusions were made by staff at the University of New York at Albany, the results of the study are available in the Journal of the American Heart Association.

“Our results highlight the alarming effects of climate change on human health and highlight the need for measures to overcome expected growth in difficult conditions that often require lifelong care and follow-up. Doctors should advise pregnant women and those planning to become pregnant that it is important to avoid extreme heat, especially three to eight weeks after conception — this is a critical period of pregnancy, ”says senior author of the study, MD Shao Lin (MD). ).

According to the Center for Disease Control and Prevention, about 40,000 newborns suffer from congenital heart disease each year.

While previous studies have found a link between the effects of heat on the mother’s body and the risk of heart defects in children, the exact mechanisms of this process remain unclear. Animal studies show that high temperatures can cause fetal cell death or interfere with some heat sensitive proteins that play an important role in fetal development. The estimate, which came to American scientists, is based on forecasts of the number of births between 2025 and 2035 in the United States and the expected growth of the average thermal effects on mothers’ organisms in different regions as a result of global climate change. The largest percentage increase in the number of newborns with CHD will be observed in the Midwest, Northeast and South of the country.

In their work, the researchers used climate change projections from NASA, simulating changes in daily maximum temperatures by geographic region, and then calculated the expected effect of heat on mothers in spring and summer. For each pregnancy and region, they identified three impact indicators: the number of excessively hot days (EHD — days when the temperature exceeded normal temperatures by 90 and 95 percent); the frequency of extreme thermal events (EHE – the number of cases when at least EHD90 and EHD95 lasted three and two days in a row, respectively); duration of ehe.

To obtain a parameter for predicting cases of congenital heart disease, the researchers used data from earlier work, also conducted under the guidance of Lin, who assessed the risk of congenital heart disease based on the effects of heat on mothers during childbirth between 1997 and 2007. Then, the researchers combined these figures with cases of CHD detected during the base period, and based on this they predicted an increase in the heat effect on the mothers’ body between 2025 and 2035.

“Although this study is only preliminary, for women in the first weeks of pregnancy it would be wise to avoid extreme temperatures, similar recommendations are given to people with cardiovascular and pulmonary diseases during heart attacks,” warns Lin.