Climate change can lead to overflow of “heavenly rivers” 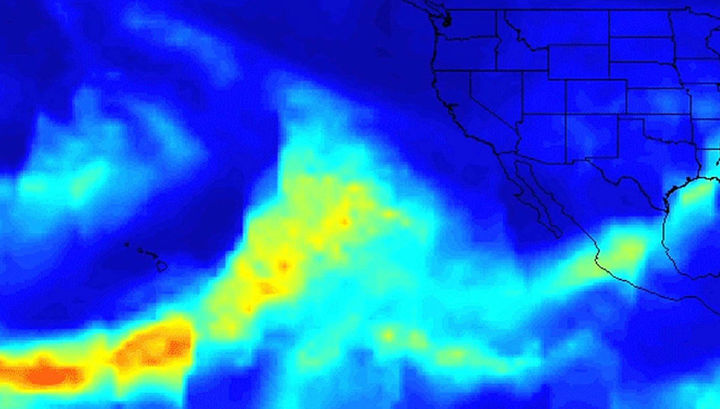 By the end of the century, in most of the world extreme weather events, known as atmospheric rivers, are likely to become more “deep-water”. However, the total amount due to climate change will decrease slightly. This conclusion was made by NASA specialists.

Let us explain that the term “atmospheric rivers” is understood to mean long and narrow jets of air, transporting a huge amount of water vapor from the tropics to the more temperate latitudes. The width of such “heavenly rivers” usually ranges from 400 to 600 kilometers. And usually they carry as much water in the form of water vapor, how many could contain 25 rivers like Mississippi.

When atmospheric river falls on shore, particularly when confronted with mountain range (such as the Sierra Nevada or Andes), most of the water vapor is deposited on the land in the form of rain or snow.

Such systems are not a rare phenomenon: at any moment the Earth can boast of an average of 11 “heavenly rivers” on average. In many parts of the world, they bring the necessary precipitation, and they make an important contribution to the annual fresh water supply. However, more powerful atmospheric rivers can cause catastrophic floods.

Until recently, scientific work on the study of climate change (which would affect, among other things, atmospheric rivers) was limited to only two regions of the world: the US West and Europe. Since usually specialists use different methods for determining “celestial rivers” and different models of climate prediction, the conclusions of one work could not be quantitatively compared with the data of the other.

The authors of the work relied on two resources: a set of widely used forecasts of global climate models for the 21st century and an algorithm for detecting atmospheric rivers, which can be applied to the results of the climate model.

It is noted that the algorithm determines the length, width of atmospheric rivers, as well as the amount of water vapor that they carry.

NASA specialists used the algorithm for detecting atmospheric rivers both from actual observations and from the model of the late 20th century. Further comparison of the data showed that the models give a relatively realistic view of the atmospheric rivers for the climate of the last century.

After the scientists applied the algorithm, using the data of the climate model of the late 21st century. Later, they also compared the occurrence frequency and characteristics of atmospheric rivers for the current climate with predictions for the future.

According to forecasts, the atmospheric rivers will become much longer and wider than those that are observed today.

“The results of study show that in the case of a scenario in which greenhouse gas emissions will remain at the current level by the end of the XXI century in the world is about 10 percent less than the atmospheric rivers” – said the study’s lead author Duane Valizer (Duane Waliser) of the Jet Propulsion Laboratory the motion of NASA.

Nevertheless, says Valiser, the results show that the atmospheric rivers will on average be 25 percent wider and longer, which means that heavy rains and strong winds will occur about 50 percent more often.

Also researchers “fed” the algorithm data to climate models, which assumed a more modest increase in the rate of greenhouse gas emissions. In this case, they received similar, albeit less radical changes. Specialists concluded that there is a direct connection between the extent of warming and the frequency and even severity of weather phenomena determined by atmospheric rivers.

Scientists say that the study has a double significance. First, knowledge of how atmospheric rivers can change in future climatic conditions will help scientists to anticipate the potential consequences of these changes. This is especially true for residents of places exposed to atmospheric rivers. It is about North Africa, New Zealand and Western Europe.

Secondly, a new approach allows us to explore atmospheric rivers at the global level. The work provides a basis for analysis and comparison, which was not previously at all.