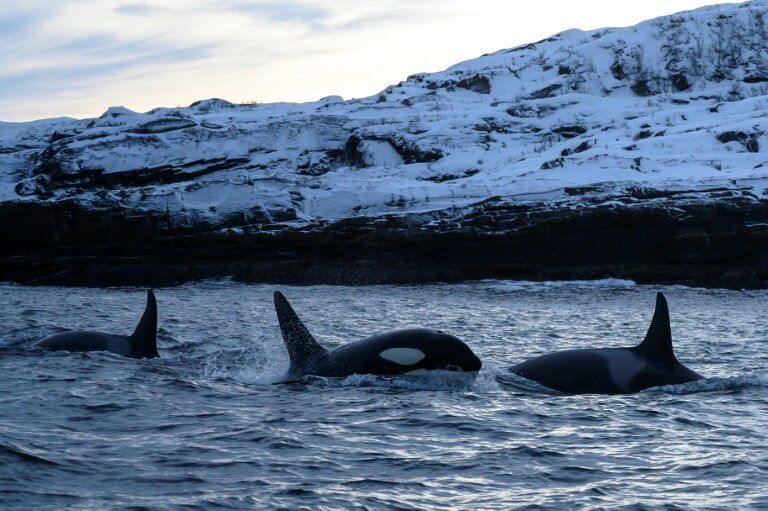 Over the past 20 years, the herring has migrated 300 kilometers to the north in search of waters whose temperature remains below six degrees Celsius – so much is needed for their reproduction. This was the reason for the migration of killer whales, which, in pursuit of herring, move north of their usual habitat.

The clear and calm waters of the 30-kilometer Rejsfjörden fjord in the Far North of Norway in recent years have become a winter “residence” for the killer whale population in this Scandinavian country. Local cold water with a temperature of three degrees Celsius is ideal for herring, which, on the eve of the spawning season – in February and March – fed up and became a welcome dish for hungry killer whales.

Killer whales circle around the herring flock, forcing the fish to rise to the surface, after which they strike the surface of the water with their large tail, stunning and eating the fish. According to Pierre Robert de Latour, founder of the organization Undersea Soft Encounter Alliance, the selection of killer whales is explained by the fact that herring is easy to hunt, it is available in large quantities and is very high in calories. However, the fact is that over the past 20 years, the herring migrated 300 kilometers to the north, leaving the Lofoten Islands in search of waters whose temperature remains below six degrees Celsius – just as much is needed for their reproduction. Norwegian killer whales, which only occasionally feed on seals or smaller whales, also follow other waters in pursuit of herring.

“We believe that global warming, which is considered to be the main cause of rising water temperatures, prompted herring to migrate further north. In the long run, as we assume, they are going to move further north. In the event of a decline in stocks of whales, killer whales, seabirds and cod, an ecological catastrophe awaits, ”warns Robert de Latour.

Today, the killer whale population along the coast of Norway seems to be flourishing. Robert de Latour estimates their numbers at 1500, which is twice as many as two decades ago. According to him, the region has become a real nursery of these animals, largely due to its abundant resources. Some researchers say that there may even be up to 3,000 killer whales, which extend from the northern mainland of Norway to the Spitsbergen archipelago and along the east coast of Greenland, which became more accessible as the ice cover was removed.

Among the threats to their population, according to Robert de Latour, in addition to global warming, are active fishing and a growing number of tourists who flock to the region for whale watching and diving. However, as noted by Tore Haug of the Norwegian Institute for Marine Research in Troms, killer whales and fishing vessels also hunting for herring have been meeting with each other for decades, which did not prevent the growth of the first population.