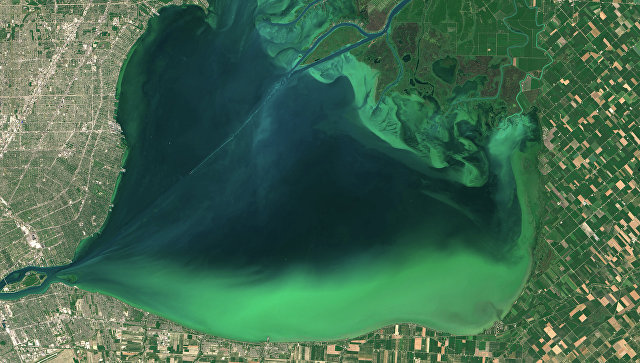 Increase in temperatures of waters in the Pacific Ocean because of global warming can make waters at west banks of the USA almost unsuitable for life of animals and dangerous to the person because of rough blossoming of seaweed and pollution of water “the zombie’s acid”, it is told in article published in the Geophysical Research Letters magazine.

“Each three-five years also other incidents with toxic seaweed which already forced the authorities of Washington and Oregon to limit catch of mollusks occurred before. But on the other hand what occurred here last year was perfect other event on scales and force of effects, and our research shows that it was connected with unusual climatic conditions in the ocean” — Ryan McCabe from university of the State of Washington in Seattle (USA) tells.

Blossoming of water is caused by the brown or blue-green seaweed living both in fresh lakes and water storage basins and in sea water. With an explosive growth of quantity of cyanobacteria and brown seaweed in water there are extensive spots which can pose a threat for human health and animals because of toxins which seaweed emit in water, clearing away themselves “living floor space”.

It is considered that climate change and, in particular, growth of water temperature, will promote increase of blossoming of seaweed, however all climatic consequences of these spots are still unknown. McCabe and his colleagues provided certificates for benefit of the fact that it really occurs, trying to understand what caused heavy-duty flash of blossoming of seaweed in west banks of the USA in the spring and winter of 2015.

Seaweed of a type of Pseudo-nitzschia australis whose cages during blossoming develop large numbers of a neurotoxin of DA, so-called “acid of the zombie” were responsible for all problems, as scientists tell. Molecules of this substance easily accumulate in tissues of a body of fishes and mollusks, and their eating by mammals, birds or people causes hallucinations, spasms and death.

Having become interested in flash of reproduction of these seaweed, scientists studied that as well as where Pseudo-nitzschia australis in last years grew and tried to determine the factors influencing their reproduction including activities of the person. The analysis which is carried out by McCabe’s group showed that flashes in activity of these seaweed mainly happen in case of abnormally high temperatures of waters during winter and summer.

These episodes of blossoming were connected with three things – with a climatic phenomenon of El Niño, global warming and pollution of waters of the ocean fertilizers and other nutrients. Global warming plays here a special role as it warms waters of the Pacific Ocean in itself and besides in addition strengthens El Niño that leads to a bigger warming up of waters.

In recent years temperature of near-surface waters as scientists note, was above a regulation on 2,5 degrees Celsius, and in the next decades and centuries it is a deviation only will grow in process of increase in annual average temperatures on Earth.

Respectively, the frequency of appearance of spots of seaweed and level of pollution of waters of the Pacific Ocean “the zombie’s acid” and other toxins will only grow. Therefore if the mankind doesn’t manage to stop climate change, the western coast of the USA can become the “dead band” polluted by toxic separation of brown seaweed and life-threatening animals and people.

And Fukushima has had no effect on this?