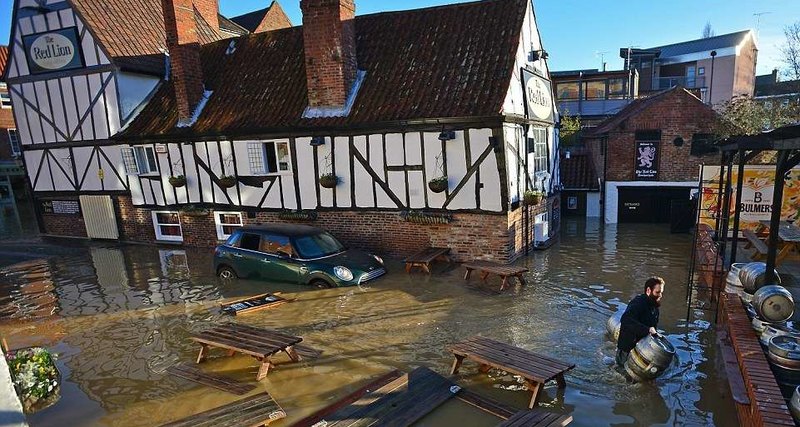 If global warming is not stopped, then by the end of this century, the number of hurricane storms and the floods caused by them in Western Europe will probably triple. This is the main conclusion of the work of a group of scientists from the University of Exeter.

A non-tropical cyclone is a hurricane, either formed in temperate latitudes or coming here from the tropics. In the Northern Hemisphere, their number per year is in the hundreds and thousands. Wind speed in an extratropical cyclone is usually smaller than that of its tropical counterparts (there are exceptions), but such a cyclone, with its any appreciable magnitude, almost always carries a lot of rainwater.

The reason is that air masses captured by the southern edge of the cyclone in the tropics or, in any case, where it is warmer, moving counterclockwise to the north, meet there with cooler air and cool down. The water vapor condenses, resulting in drops, ready to fall down.

While the wind speed is high enough, this does not happen, but as soon as the storm emerges from the ocean onto the land, its power begins to rapidly decrease. The wind subsides (well, by natural standards), but it starts to rain a lot.

In Europe, the British Isles, which are surrounded by sea water, often suffer from such effects. Significant flooding was noted in Somerset in 2013/14, in Cumbria in 2015 and in Gloucestershire in 2007.

In a new study, scientists analyzed the behavior of current and future cyclones using the most modern methods of modeling meteorological events. The team was able to assess changes in the frequency and intensity of these extra-tropical cyclones with greater reliability than the one that previous studies could offer.

It turned out that if the pace of global warming remains today, then by the end of our century the frequency of strong cyclones, fraught with flooding, in the North Atlantic will triple. In addition to Europe, the coastal regions of the eastern United States are under threat.

As one of the authors of the work, Dr. Matt Hawcroft, said: “Due to the complexity and instability of climate models, there is great uncertainty in the forecast of changes at the regional level. It is important to be able to distinguish reliable information where possible. But, despite these difficulties, we can make large and consistent predictions of significant climate change. ”

The study was published in Environmental Research Letters on Tuesday, November 27, 2018. His brief retelling is available on the portal phys.org.