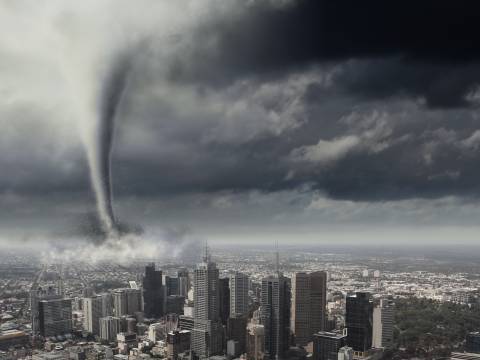 What can be more destructive than large-scale natural disaster? Only massive nuclear attack. But if to hide use of nuclear weapon it won’t turn out, use of climatic weapon will help to reach desirable effect and at the same time to save face on the international scene.

People dreamed to use all power of weather cataclysms for achievement of the military purposes always. In the second half of the XX century these dreams almost became a reality. In the 1950th years it became clear to scientists that due to overcooling of clouds it is possible to cause loss of rainfall.

During the Vietnamese war the American military checked this theory in practice: within transaction of Popeye between 1967 and 1972 over the jungle 5400 t of iodide of silver and iodide of lead were sprayed. Triple increase in rainfall was as a result fixed: the rainy season in an upper course of Mekong was extended from 30 to 45 days. There are data that the awful flood of 1971 which covered 10% of the territory of the country was caused by this impact.

Popeye transaction clearly shows all dangers and difficulties of use of “climatic weapon”. The purpose before it was quite local: degradation of “Ho Chi Minh’s track”, ways on which the Vietnamese guerrillas received supply. It wasn’t succeeded to execute it, despite the huge spent funds and the threat created to all peninsula.

The beginning was contradictory, however experiments with climate change weren’t limited to Vietnam. Up to 1983 in a subsoil of the American laboratories at full speed there were researches within the Stormfury project. This time scientists wanted to subordinate hurricanes and typhoons.

First the purpose of experiments seemed noble, thousands, and even hundreds of thousands of people annually suffer from such winds. But considering the destructive force of typhoons, temptation to use them in the military purposes it was too big… On some (however, not too reliable) to messages, some success was achieved, and in 1969 the USA “redirected” a hurricane to Panama which relations with the White House were then more than cool. However since then, despite destructive Katrina and other typhoons, use of these technologies for some reason stopped…

Popeye was only a part of the program for fight against the Vietnamese guerrillas. Air transaction on the earth was supplemented by the American military from Jungle Eaters – division with the special bulldozers Rome Plow D7E. These machines were used to remove the upper layer of earth. Thus, sites for long time became unsuitable for vegetation and – not without the aid of silver iodide – turned into these swamps.

The Soviet Union didn’t want to lag behind the USA in questions of perspective arms. Therefore in the 1980th years of the USSR together with Cuba began development of the program designed to influence behavior of winds. The agreement of 1977 forbidding any use of similar weapon a hindrance didn’t become: in our country everything is created only in the peace purposes.

However, before creation of management systems problems more serious, than interstate liabilities were available weather. Main of them – energy. Energy of a regular cumulonimbus cloud is comparable with the energy concluded in an average nuclear warhead. Only one heating of one cubic kilometer of airspace requires the power station of huge capacity. And meanwhile seriously to speak about global impact on weather, it is necessary to learn to influence thousands and thousands of kilometers of the atmosphere.

However, when the conversation on climatic weapon, on such “trifles” as the Popeye or Stormfury project comes, remember seldom. All something seems, capable to plunge on knees the whole world entirely – and, of course, connected with some conspiracy theory.

Among developments which are allegedly applied or applied to influence on climate, honourable first place the American HAARP wins (High Frequency Active Auroral Research Program – “The program of a research of a polar light high-frequency impact”). The first practices on the project appeared in the 1960th, and in the 1997th year of HAARP was started officially.

The complex located on Alaska consists of antennas, laser locators, magnetometers, the radar of incoherent radiation and the processing equipment. From outside it is similar to a huge number of the television antennas sent to the sky. The construction of HAARP cost 250 million dollars, and on its content up to closing in 2014 about 2,5 million dollars a year left.

But why attribute to the HAARP complex fantastic capabilities? In this respect there are no direct certificates – unless an arrangement on the proving ground and the corresponding protection. However claim as if HAARP antennas are capable to create “balls of fire” in the atmosphere and to move them to any point of Earth, causing floods, typhoons, hurricanes, a strong heat or other disasters… In recent years there was no natural cataclysm of which wouldn’t accuse HAARP. Even the terrible earthquake to Haiti of 2010 is attributed to Americans, and if a natural disaster occurred in China or Russia – precisely, America is guilty.

However even in the theory of HAARP it couldn’t be used as weapon owing to the objective facts. Capacity of its radiation (3,6 MW) is obviously not enough for a versheniye of destinies of the world. This potential won’t be enough even for insignificant atmospheric action. At last, project closure in the summer of 2014 can finally dispel the myth about secret climatic weapon. If Americans really created something outstanding by means of what it is possible to manage weather – they would begin to wind down the project?.

Studying of behavior of an ionosphere and polar light was the official purpose of creation of HAARP. Really, antennas could influence local sites of an ionosphere, allowing scientists to make necessary experiments. For example, by means of HAARP studied behavior in an ionosphere of charged particles. But hardly something bigger. Unfortunately, results of work of a complex remain secret. On them more open similar projects, such as EISCAT, SPEAR, or the Soviet analogs can give some hint.

Experiments with studying of an ionosphere were made also in the USSR. In the 1950th years near the city of Zmiyov (Ukraine, the Kharkiv region) the construction of such station began. Since 1954 employees of this complex conducted researches of fluctuations of electronic concentration in an ionosphere. Unusual appearance – the huge plate hanging in air – generated the mass of the most different rumors around the station. But still big popularity was purchased by the complex of studying of an ionosphere similar to destination Sura located in the Nizhny Novgorod Region. It turns on 144 antennas with the cumulative transferred capacity of 750 KW.

Since the collapse of the USSR Sura suffers from a lack of money – about 40 thousand dollars a year are allocated for its maintenance. It is enough unless for elementary expenses though to some extent the complex remains in working order and today. Here researches in the most different areas are conducted. On the official site among them the research of regularities of generation of artificial turbulence and artificial electromagnetic radiation of ionospheric plasma in various ranges is specified “(QUARTER, the microwave oven, optical luminescences) in case of impact it powerful radio waves”.

Judging by this airtight phrase, the theory about works on climatic weapon can be not deprived of the bases. The fact that financing of this project in the Soviet years was conducted through Defense agency serves as one more evidence for benefit of the “military” version. But even if such experiments also were, here pertinently to speak unless about basic, fundamental works for creation of climatic weapon in the future. Capacity of radiation Sura – many times is less even than HAARP – obviously insufficiently seriously to argue on this weapon.

Climatic weapon of the USA – an indispensable part of an arsenal of populists. For example, use it against Iran in the fall of 2012 was declared by the president of the country Mahmoud Ahmadinejad. Similar statements were made also by Vladimir Zhirinovsky in connection with floods in Sochi and in the Far East in 2013.

Since silver iodide use during the war in Vietnam there passed decades, and technologies didn’t stand still. Modern projects of stimulation of loss of rainfall are far more effective. For example, Dyn-O-Gel is capable to absorb and turn into gel moisture in a subsoil of the arising hurricane. However, to affect the front of the sizes of 20×20 km, it is necessary to use 38 t of substance moreover and “to abandon” them in dangerous proximity from elements.

However some specialists notice that by means of such substance – if to make enough efforts – it is possible to cause this flood. That the pouring rain spilled in the territory of 1 sq.km, it is required to use 10 t of Dyn-O-Gel. To the contrary, it can bring also a drought: during testing in Miami the transport aircraft poured out 1,6 km 4 t of Dyn-O-Gel long on a thundercloud, and soon the cloud was just dissolved!

For today use of Dyn-O-Gel or other “climatic” substances in the military purposes isn’t confirmed. But it doesn’t prevent to create more and more effective remedies of management of weather. In 2014 to year information on development by Americans of the laser machine capable to cause thunder-storms and lightnings appeared.

But also here military use is very doubtful: energy of a laser bunch quickly dissipates in the atmosphere, especially storm when humidity is increased. Scientists assume to solve these problems by creation of a double bunch in which the powerful laser beam “envelops” a beam of smaller intensity which protects and feeds it in process of forces.

Many technical aspects of this decision are still unknown, however US military men already invested 7,5 million dollars in development of the Arizonian professor Demetrios Christodoulides. Very much can be that this technology will allow to create climatic weapon in the form in which we know it according to fantastic works.

Experiments on creation of gidrosferny weapon began long before the Vietnamese war. In the 1940th years in the USA the Seal project worked. Its essence was simple: on a seabed made explosion of a nuclear charge then watched behavior of the formed sea wave. Such experiments had ambiguous results, and after signing of the document on a prohibition of nuclear testing were stopped.

The expert in the field of perspective arms, the doctor of philosophy, the colonel Andrey Shalygin shared the opinion with us:

– There are, in particular, installations for creation of the artificial storm Weathertec front which were established by the scientists from Switzerland hired by the Meteo Systems company. Their creation is financed by the president of the United Arab Emirates sheikh Khalifa ibn Zayd Al Nahayan. These are just weather installations with the utilitarian local purposes, they aren’t climatic weapon as such. The same concerns also the advertized systems, such as High Frequency Active Auroral Research Program (HAARP), Sura and other. The main thing that now happens to climatic conditions on the planet and what it is necessary to speak regardless of a formulation of the generated reasons, this weakening of global width transfer and strengthening of meridional about. First of all, for us it is meant by weakening of traditional trade winds and monsoons, and also emergence, activization and strengthening of the breakthrough stagnant (blocking) anti-cyclones. Both some discomfort, and possible damage is connected with it for residents of Russia. In our case all this is caused by intensive destruction of natural protective factors of the environment in North Africa and East Mediterranean.

Despite everything, prospects of climatic weapon in his commonly accepted understanding remain foggy. The issue of energy supply of such systems won’t be resolved yet, to speak about threat from climatic weapon is inappropriate.