Clones of Dolly the sheep have confirmed the safety of cloning 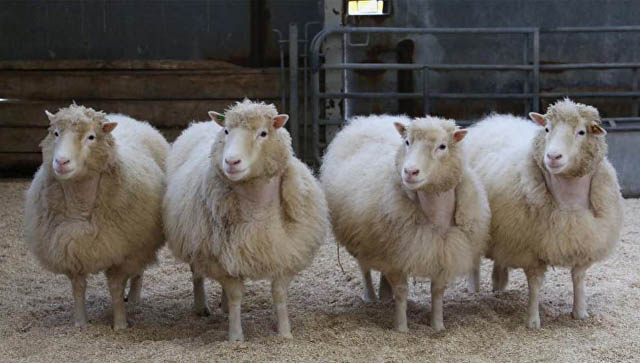 Clone the first cloned animal, Dolly the sheep, continue to live and maintain health for more than nine years, almost two times more than existed the Dolly that talks about the safety of cloning, said in an article published in the journal Nature Communications.

The most famous sheep in the world, Dolly, was born in the laboratories of the Institute Rossinskogo in July 1996, the first in the world experiment on the cultivation of clone an animal from adult cells. Dolly lived short enough for the sheep life is 6.5 years and died in 2003 from osteoarthritis that has caused many opponents of cloning say that this process leads to irreversible damage in the body and leads to accelerated aging of the clone.

Kevin Sinclair (Kevin Sinclair) from the University of Nottingham (UK) and his colleagues have shown in practice that such allegations are not true, creating four clone Dolly the sheep from the cells of its mammary gland, as well as nine other clones, none of which still did not die or was not seriously ill.

“The age of our sheep is from seven to ten years, and they all showed a full medical examination in the past year, and as you can see by visiting our farm right now are in good physical shape. They are the product of our efforts for the improvement of cloning technologies, and to demonstrate that these technologies work and that they do not cause premature aging due to the reduction in telomere length,” commented the study Sinclair.

According to Sinclair, his team followed the health of sheep throughout the whole of their lives, watching as their joints, metabolism and other problem areas, issues which led to the premature death of Dolly. In parallel, scientists have grown a “normal” sheep, comparing their rate of aging with the aging of clones.

As the researchers note, clones are no different from normal sheep except for one individual, they have no problems with the bones, and none of the “Dolly sister” — Debbie, Denise, Diana and Daisy, as they are called biologists, not suffering from diabetes, high blood pressure and other problems with metabolism and blood circulation system.

The lack of differences between clones and normal sheep seems to indicate that the cloning process does not change the functioning of cells and the genome, which lead to premature aging and health problems that was attributed to him by the opponents of cloning.

Additional optimism, according to Sinclair, adds that the success of the cloning improved significantly – from 3% of embryos to Dolly and other cloned animals the first up to 30% today. This opens up opportunities for the use of clones in research experiences and allows for thinking about the replenishment of the wild populations, which are today threatened with extinction.