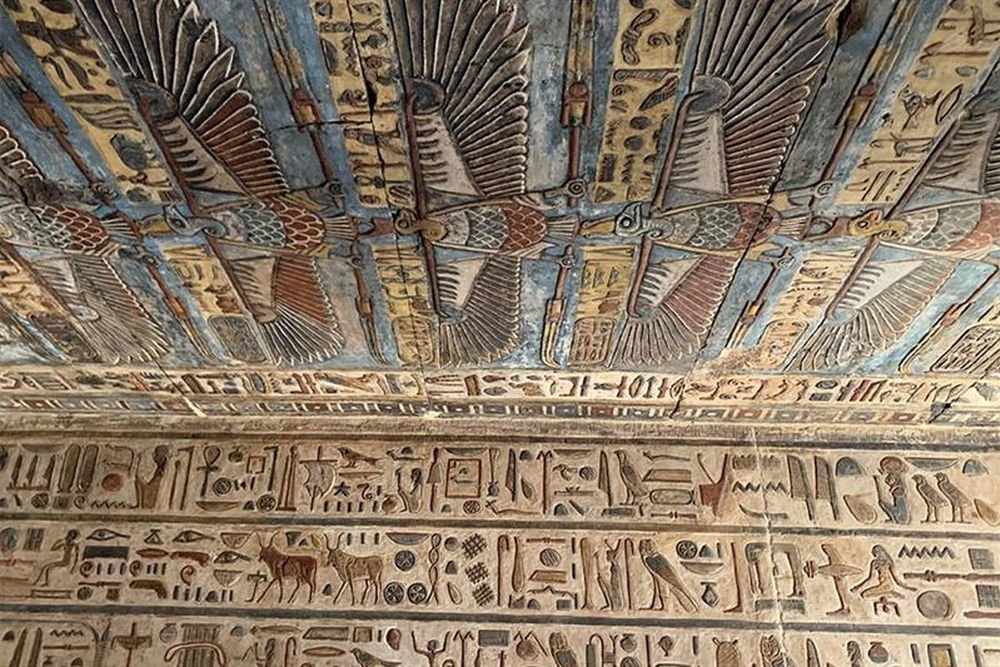 In Egypt, a joint German-Egyptian archaeological mission, while conducting survey and restoration work at the temple of Esna on the west bank of the Nile, discovered some of the original colors and patterns preserved on the ceiling of this temple complex.

According to the Egyptian Ministry of Tourism and Antiquities, the discovery was made in a temple located almost 50 kilometers south of the city of Luxor. An international team of archaeologists carried out restoration work there.

Experts methodically clean the walls and ceiling of the ancient temple complex from plaque. Over the past millennia, they have been covered with a layer of sandy dust, mud, salt, and droppings from birds and bats. As it turned out, real masterpieces of antiquity are still stored under this layer.

So, on the ceiling of the temple, the researchers found 46 bright eagles arranged in two rows. As scientists say, it’s hard to believe, but some paints have been preserved in their original form. For Egyptologists, this is a huge success – the original colors of Ancient Egypt are extremely rare. Therefore, one often only has to guess how exactly they looked in antiquity, for example, not only temples, but also the famous pyramids.

In this case, the original colors and patterns were found under the middle ceiling above the entrance to the temple. A thorough cleaning process revealed the whole picture. Interestingly, 24 eagles actually have eagle heads. They symbolize Upper Egypt. The rest of the eagles have cobra heads and represent Lower Egypt.

Egyptologists explain that birds with eagle heads are the personification of the goddess Nekhbet, the patroness of Upper Egypt. And the goddess of Lower Egypt was Wajit, who was traditionally symbolized by an eagle with the head of a cobra.

The researchers also found Greek inscriptions written in red ink on the western wall of the temple. The texts were completely hidden under a layer of black soot. Deciphering showed that they belong to the period of the reign of the emperor Domitian (81-96 AD). Archaeologists believe that the texts contain the exact date of completion of the construction of this temple, dedicated to Khnum, the ancient Egyptian god-creator who blinded a man on a potter’s wheel.