Cockroaches-cyborgs will be looking for survivors in natural disasters 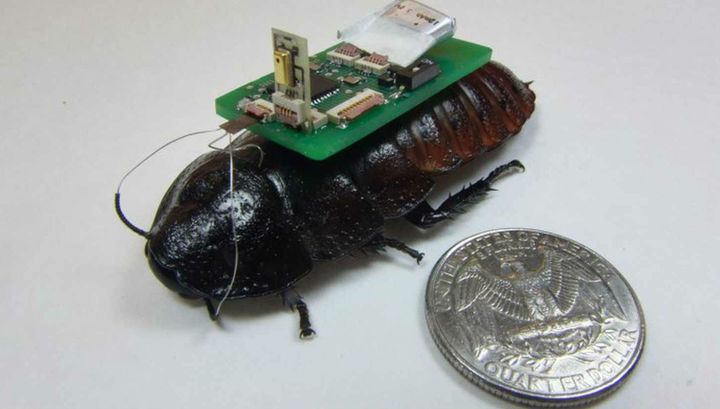 Engineers have repeatedly created robots that their appearance and behavior resembled insects such as bees, caterpillars and cockroaches. The team from the University of North Carolina decided to go the other way. Edgar Lobaton (Edgar Lobaton) and his colleagues created from live insects cockroaches-cyborgs (in fact, they have already learned to recognize people by voice). In the future, these creatures can be used for reconnaissance and searching of people, for example, in areas of natural disasters.

On the back of each cockroach has a small electronic circuit connected to the sense organs that insects are usually used for navigation. Located on the last segment of the abdomen the paired appendages – cerci that are sensitive to air movement and usually warn the insect of the approach of the predator, while the antennae on the head touching the surface in front of the creature and report on the obstacles on the way.

Researchers have learned how to stimulate these organs, turning cockroaches into an analog toy remote control car. Electric pulses acting on the Church, forcing the insects to accelerate, and by sending artificial signals to antennae, you can get the cockroaches to turn right or left.

According to plan of developers, managing a bunch of biological robots, equipped with various sensors that can be carried out with the help of a flying drone, which will monitor their movement and to coordinate action.

The idea was to release a swarm bobotov, such as remotely controlled cockroaches in the ruins of collapsed buildings or other dangerous areas, says Lobaton in a press release. – The use of technology of remote control would limit the range of the system, but with the use of unmanned aircraft systems capabilities of robots will be much wider.

Previously, the team developed the necessary software and tested concept, which allows you to build the plan area based on the analysis of its individual sections. As arthropods, the scouts will move, the algorithm will process the collected data. After receiving sufficient information, the drone moves to a new position, dragging a pack of cockroaches. At the last stage of the program will be from separate fragments of a complete map of the study area.

During the tests the researchers used Roy toy robot bugs Hexbugs to research collected in the laboratory maze. While the tiny machine, tossed in a confined space, the program has identified open and inaccessible regions and recreated the map of the area. Soon Lobaton and his colleagues plan to repeat the experiment with real cockroaches-cyborgs.