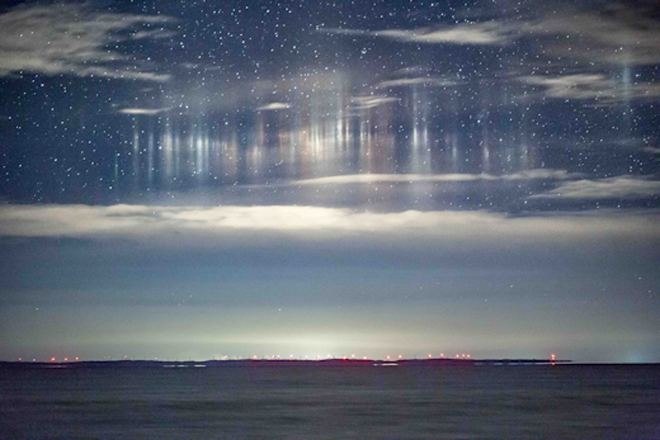 On the night of October 16, Vincent Brady from Paradise, Michigan, went in search of auroras, but saw something completely different. “When I arrived at the scene, colorful pillars of light floated over Whitefish Bay. That’s a surprise! ”Said the photographer.

These columns resemble auroras, but in fact have nothing to do with space weather, but are caused by ice crystals in the air, which intercept artificial lights and scatter them into colored vertical shapes. This activity does not require solar activity. The only ingredients are ice and light pollution.

Reds come from wind turbines around the Canadian island of Ile Parciennes. Warm orange is from high-pressure sodium lamps, and blue-white is from modern LED lamps.

Such pillars can often be seen in northern latitudes, especially when the cold winter air fills with ice crystals. However, as a rule, they are located not so far from the surface with city lights.