Colors of Rupert Bay in a photo from space 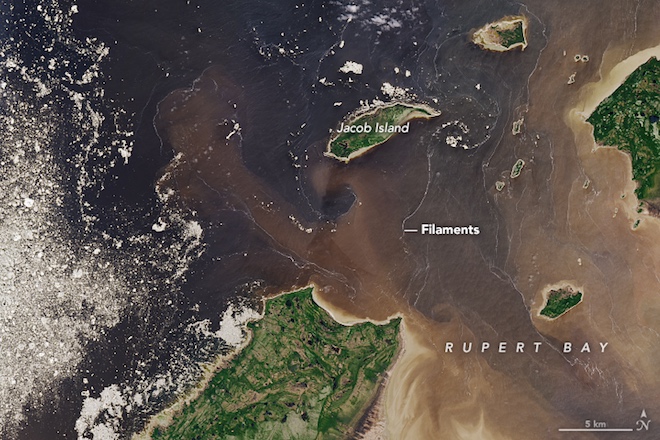 Rupert Bay in Quebec (Canada) – one of those places that are worth a look from space. Near the water may seem relatively homogeneous. But from space, patterns are seen – evidence of fluid dynamics that occurs when fresh river water meets the sea. The OLI tool on NASA’s Landsat 8 satellite took this picture in natural colors on June 9, 2018.

The water at the shore is light brown with deposits that were brought by waves moving along clay shoal. The middle part of the bay is also colored by sediments, but the water is darker due to dissolved organic matter, which stains water in the color of tea. Organic material comes from nearby peatlands and is transported to the bay. The long “tongue” of this colored river water diluted with sea water extends to the northwest into James Bay.

In the picture above, another interesting element is shown – long, white, twisting yarn of foam. According to Greg McCullough, an expert on freshwater and marine waters at the University of Manitoba, these threads probably indicate the boundaries between continental fresh water and saltwater. Turbulence along the boundaries leads to the formation of organic films, which, when assembled, form bubbles – just as soap forms bubbles with vigorous mixing in water.

Also note the twist to the southeast of Jacob Island. McCullough notes that maps of ice accumulation indicate that the bay was ice-free by mid-May – even before the picture was taken. However, white threads and spots in the vortex may be fragments of ice that moved from James Bay to Rupert Bay in early spring. It can also contain frozen vegetation and sediments washed from the seabed by ice.