Comet dust reveals the secret birth of the planets 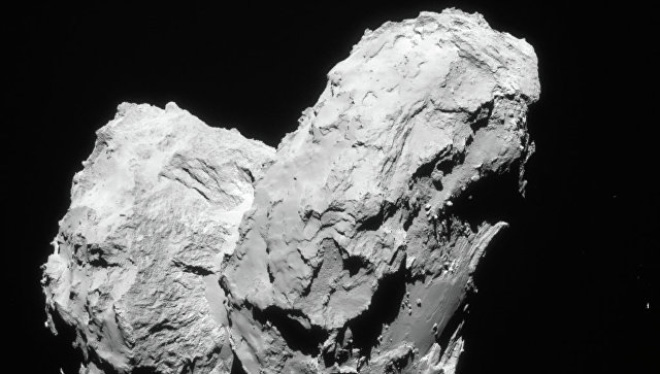 A team of scientists of the mission “Rosetta” has shared the first results of the analysis of dust particles of the comet Churyumov — Gerasimenko, captured by the tools of the probe during the flyby of the celestial body. The obtained data allowed to assume, as formed by “germ” of the planets and how the Earth was born.

According to the main hypothesis, the formation of planets occurs inside of a flat disk, filled with dense accumulations of gas and dust particles. The final stage is a series of collisions resulting planetary “embryos”, or planetesimals, reaching the size of Ceres or Vesta, as well as large asteroids and comets. However, an intermediate of this process remained a mystery.

Due to the apparatus “Rosetta” for the first time managed to collect samples of pure cometary dust formed at the birth of planets, to conduct its analysis and to reveal the probable mechanism of adhesion of dust grains in a structure of larger dimensions.

As told by mark Bentley from the Austrian Institute for space studies and his colleagues, for two years, studying the comet Churyumov — Gerasimenko mounted on the “Rosetta” space “vacuum cleaner” MIDAS collected a lot of dust ejected from cometary “tail”, and has accumulated data on size, shape and physical properties of these grains of matter. Spectrometer Rosetta COSIMA gave the opportunity to study their chemical composition.

It was expected that dust from the interior of the comet will differ monotony. However, the dimensions, weight and properties of the particles were very heterogeneous. Among them was a small dense grains in the form of an ellipse, and the particles average size and larger, but the loose structure formed by fusion of small particles.

According to scientists, the “species composition” of this comet dust resembles a doll with gradually increasing elements. Such a feature may serve as a confirmation of one of the most common modern theories explaining the formation of a “space pebble” and larger fragments of rocks consistent grip and a merge of dust particles under the influence of electrostatic forces. Thus, the results of researches allow to bring some clarity to the scientific understanding of the earliest stage of the birth of the Earth and other planets.