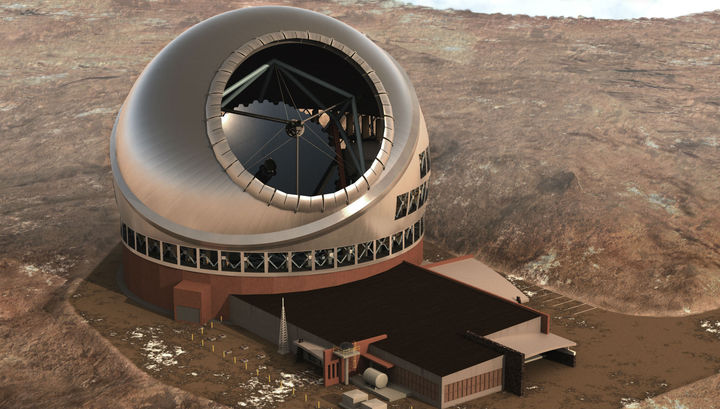 The project on creation of the world’s largest telescope can change slightly: there is a probability that experts will be forced to move construction of the facility to absolutely other place. The thirty-meter telescope (Thirty Meter Telescope, TMT) initially had to be constructed in Hawaii, however it was prevented by indigenous people which considers the alleged site sacred.

Representatives of the project have declared that replacement of a location the site on the Canary Islands can become possible.

Let’s remind that the project worth 1,4 billion US dollars will allow experts to investigate the early Universe and even to consider the atmosphere of exoplanets. Creators and other objects, by the way, aspire to it. The TMT telescope – one of a set of huge observatories (along with the European extremely big telescope (E-ELT) and the space telescope of James Webb (JWST)) which, as expected, have to begin work in the 2020th years.

Let’s explain that, according to the plan, TMT will have a 30-meter segment mirror; the device will allow to collect in nine times more light, than the largest of the existing land telescopes. For example, in comparison with the Hubble telescope, the images received from the new telescope will be about 10-12 times more accurate.

The site intended for construction of TMT is located at the height of 4050 meters above sea level, at top of an extinct volcano of Mauna Kea, near the well-known observatory of W. M.Keck Observatory. The clear Pacific sky and other parameters create practical ideal conditions for operation of the astronomical equipment.

However the indigenous people opposes construction of observatory for a long time at top of Mauna Kea as this place is connected with deities of their religion. In this regard construction of the telescope will be considered as defilement of sacred places. But there are also other opponents who consider that the project will cause ecological damage.

Construction had to begin in April, 2015, however protesters have blocked access roads, without allowing workers to reach the place. Several arrests have as a result followed, but opponents of emergence of the telescope at volcano top also advocated the interests and in court.

And they have achieved the: in December, 2015 the Supreme Court of the State of Hawaii has cancelled the construction license, having concluded that permission has been given too early and his opponents haven’t got chance to state the arguments.

All this means that experts of the TMT project should look for the new space for construction or to try to obtain new permission in Hawaii.

Last week project managers have met for discussion of a problem. The chairman of the international Council of observatory of TMT Henry Yang has noted that experts have studied several potential platforms under construction of the facility, and all of them as experts consider, will allow to execute necessary scientific programs.

“After dative discussion board of governors Palma of the Canary Islands as the main alternative to Hawaii has defined Roque’s observatory of de los of Observatorio del Roque de los Muchachos on the island” — Yang says.

On this island there are already several telescopes though the Canary conditions after all lose to Hawaiian. Vulcan Mauna-Kea settles down on more sublime and remote site that provides lack of light pollution and atmospheric turbulence which can interfere with observations.

Scientists and economists have agreed in opinion that transfer of construction can lead to serious problems for the project which was developed within the last 15 years. According to representatives of Council of TMT, they will still try to obtain permission of construction in Hawaii, and the Canary Islands remain “the plan of B” so far.