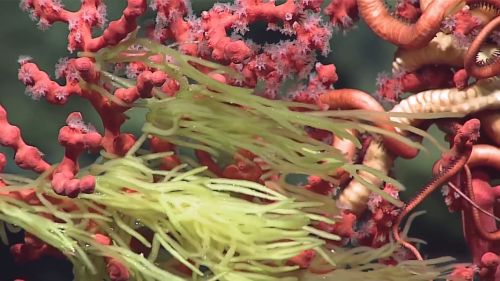 The expedition on a research of sea life at the Mariana Islands in the Pacific Ocean has shot magnificent new video. The roller represents coral polyps of Paragorgia arborea which are surprisingly similar to chewing gum, and strange creations which consider red-pink water structures the house.

Researchers of the Okeanos Explorer team of National administration of oceanic and atmospheric researches have come across a coral of krichashche-red color at the Mariana Islands on June 17, 2016 at a depth of 518 meters.

The delightful video made by team shows a branchy coral around which strange beings smoothly slide. The scientific team has been especially intrigued with green threads on a coral as on a seabed almost completely there is no light. Researchers consider that it is a type of a sponge or seaweed which were caught by a coral.

Scientists were also interested in a worm-shaped zmeekhvostka, or an ofiura which very densely clings to a coral. The crab and several other animals are also grazed by a row. “It is a small oasis for all types of life” — one of sea biologists has noted.