Created a robot surgeon, which must be eaten 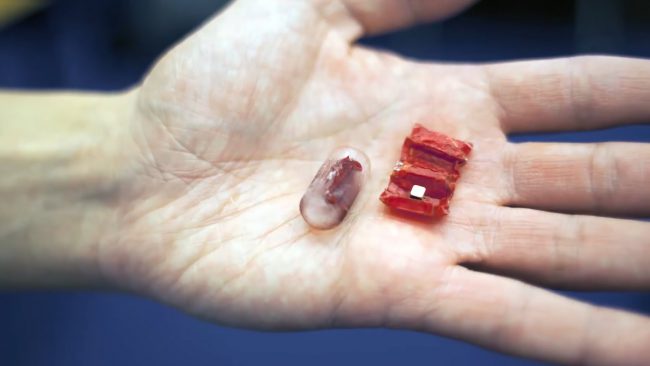 When we hear “robot-surgeon”, we most likely imagine huge machines “armed” with scalpels. But very soon the meaning of this phrase can radically change. The fact is that, according to an article published in the journal Science Translational Medicine, a group of researchers created a small robot that can operate patients from within without a single incision on the skin.

A miniature robot surgeon was named Smart Tissue (STAR). For its creation are specialists from the Johns Hopkins University. The skills that STAR possesses can cause envy even in the most experienced surgeons.

During a series of laboratory tests, a small surgeon performed a series of operations on live pigs. During the experimental operation, the robot was programmed to create an intestinal anastomosis (connection of the intestinal regions, which is often required when removing tumors, necrosis and other conditions). So, the stitching of two sections of the pig’s small intestine was successful, and the robot coped with the task. At the same time, there were no external injuries to the animal, since the robot is inserted through the mouth. It is worth mentioning that the person still took part in the operation: he supported the thread for suturing. But considering that this is only the first model of the robot, in the future, human participation in operations can be avoided.

The active development of robotic medical equipment is due to the fact that, according to the researchers, qualified personnel are not always enough to conduct complex operations. For example, according to estimates of Australian scientists, by 2030 the need for workers in the medical field will reach 40 million people, while the real number will be more than 2 times less – 18 million people.