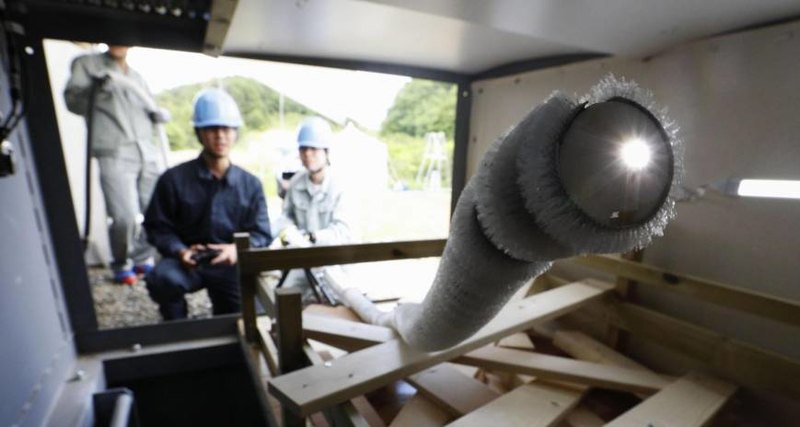 8-meter robot-snake is designed to help the victims after the earthquake and tsunami. He can climb walls and climb into hard-to-reach places, avoiding collisions with various objects.

Japanese researchers from the University of Tohoku have created a robot that can climb the walls and climb into hard-to-reach places to rescue the victims after the earthquake and tsunami.

The robot looks like a snake, but instead of scales it is covered with short hair. In length it reaches 8 meters. It can climb over a wall or other object up to a height of 20 meters, as well as quickly change the direction of movement to avoid a collision. The robot weighs about 3 kg and moves at a speed of 10 m / s. And thanks to the camera installed at the front end of the snake-like robot, you can search for people trapped inside the destroyed buildings.

Professor Satoshi Tadokoro, who worked on the project of the snake-like robot, said that the possibilities of its device go beyond the limits of human. The machine can search for hard-to-reach areas of disasters (for example, destroyed after strong earthquakes at home) and to check how safe the terrain is.

To create a similar robot, Professor Tadokoro and his colleagues decided after a major catastrophe that occurred in Japan in 2011. The team stated that their car was created to help with natural disasters around the world. They expect that the robot will be able to fully work after 3 years.

The robot has already been tested during the surveys at the Fukushima-1 nuclear power plant, in which a major accident occurred in 2011. With the help of tests it was possible to identify the problems of the robot – now it has problems with the definition of some obstacles. The research team is working to resolve the problem.