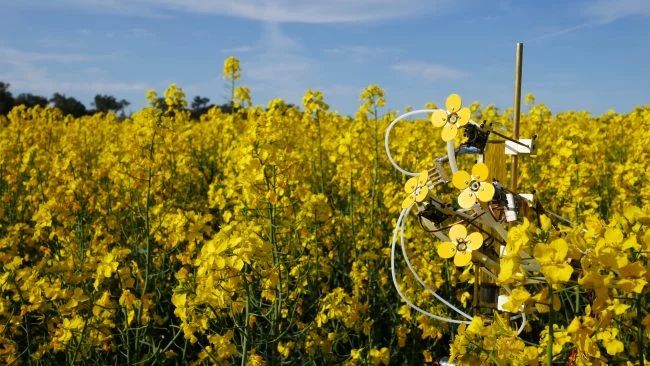 As is known, in nature everything is interconnected, and the disappearance of one species will undoubtedly entail problems for others. For example, a few years ago, according to reports of US scientists, the population of bees declined by 42%. Many associated the extinction of bees with the deterioration of the ecological situation and the change in flower nectar. And it is to the latter problem, as the publication Deezen, one of the Australians decided to attract attention. He created artificial flowers that completely copy their natural counterparts.

For the development is responsible for the artist from Australia, Michael Candy. The flowers created by him have four petals of yellow color. The color was chosen in such a way that it resembled the color of rapeseed. In the center of each artificial flower there is a tube for feeding nectar, and around the nectar there is a pollen feeding system with three retractable artificial stamens. The composition of artificial nectar includes water and sugar in proportions, close to those of natural nectar. With pollen, however, some difficulties arose: it was not yet possible to develop an artificial analogue, although some experts are inclined to assert that in the future this will be possible. Therefore, for his project, Michael used the real pollen collected in the hives of bees.

As a result of the experiment it was possible to establish that such artificial flowers are quite suitable for using them as a reserve for the restoration of flower fields and for attracting a population of bees to new areas. In the video below, you can see how the pollen and nectar system works in an artificial flower, and how the bees interact with it.