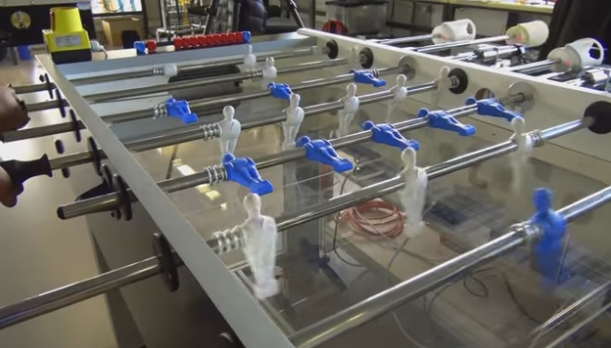 Students of the Federal Polytechnic school of Lausanne has created a robot that can play foosball. He may keep the company of players with average skills.

In the future the developers intend to improve the robot so that he could choose the strategy of the game. The creators are also planning to organize competitions between similar robots.

The robot uses linear motors for the positioning of the figures of the players. Another motor is used for rotation and impact. According to the developers, the robot moves figures with millimeter accuracy. The motors can provide acceleration up to 9g, which allows the robot to control the players faster than a human.

High speed camera mounted above the table, allows the robot to see everything that happens on the field. The camera is able to provide speed shooting up to 300 frames per second.

In the future the system will be able to make a deceptive movement to mislead an opponent. In addition, the robot is able to predict the movement of the ball and the location of the figures of enemy players.