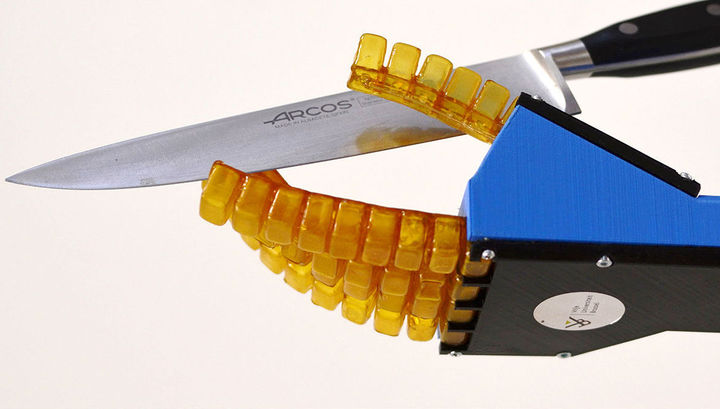 The skills of robots do not cease to amaze. Engineers try to endow them with superpowers, which will be useful in the most unpredictable situations (sometimes even destructive for technology). This time, Belgian scientists took a step toward self-healing robots.

Quite often robots are sent to dangerous tasks, for example, to investigate the reactor of the nuclear power plant “Fukushima-1.” Specialists who develop soft robots, thought that it would be nice to teach them to recover when things go very badly. And in this they will help the recently developed method of scholars of the Brussels Free University (Vrije Universiteit Brussel). Briefly it can be described as follows: you need to add just a little heat.

To demonstrate the effectiveness of their method, Belgian scientists have created three objects: a gripping device, a robotic arm and artificial muscles – all are endowed with the ability to self-repair.

All of them were made from a special polymer “with built-in medicinal properties,” according to a press release from the university. In case of damage, they first restore their original form, and then completely “heal”.

So, if you break or cut material, then its parts can be back “merged” with each other, the developers explain.

To test a new “talent”, scientists cut all three objects with a scalpel, and then put them in the oven. All of them “baked” there for 40 minutes at a temperature of 80 degrees Celsius. They were then cooled to room temperature. After the procedure, the researchers found that all the “knife injuries” of the robotic arm, gripping device and artificial muscles were completely “dragged out.” Scientists have estimated repair efficiency at 98-99 percent.

It is noted that 80 degrees Celsius is enough to break the molecular bonds of the polymer material and allow it to “seal” the damage at macroscopic and microscopic levels once it is cooled to room temperature.

When breaking / cutting, the bonds between the two chemical ingredients of the material – furan and maleimide – are broken. At elevated temperatures, these two chemicals can also break ties and move. In the process of cooling, the connections again form bonds with the “colleagues” on the other side of the rupture and thus heal the material.

“The polymer consists of a large number of different threads that connect with each other to ultimately form the material,” says lead author of the study Bram Vanderborght (Bram Vanderborght).

According to him, it is worth a little to warm up the system, as these threads begin to be rebuilt in such a way as to unite with each other again and leave no weak spots in which further breaks could form.

Moreover, the material can be dissolved in chloroform and “re-profiled” into another form or object, if necessary. This feature in advance paves the way for the processing of soft robots created from such material.

We add that the development helps to eliminate the main limitation of soft robots, which are better suited than their traditional, hard analogs, for moving over rough terrain and working with fragile objects. However, they are also more prone to damage.

In the future, Funderborgcht and his colleagues want to teach the robot to self-repair automatically. While two options are considered, how to achieve this: by changing the original “self-healing” material or by training the robots to apply heat to the damage site.

“The situation, when the normal parts of the robot will be needed to completely replace them, will soon change,” says Funderborght.